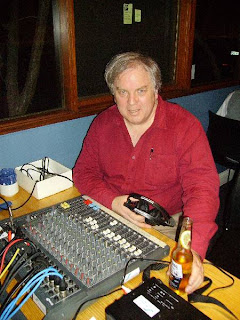 Here’s Chris Deacon at The Gods Café recording Straight Up! for ArtSound. Keep an ear out for the transmission of this gem of a concert. Chris appears (usually alternate weeks) on Saturday afternoons on ArtSound in Music Works, his jazz/world music show. Keep an ear to Music Works and ArtSound for what’s on the radio, and also news on the arts in Canberra.

Chris has been recording jazz and other music around Canberra for 25 years, so ArtSound holds an immense and valuable resource. BTW, it’s all done with approval of musicians, and rights are strictly respected.

ArtSound is a local gem. It’s a community radio station, run on professional lines with mostly volunteer staff. It provides an intelligent and satisfying coverage of the arts in Canberra and more widely, and records this for posterity. How it can perform such a professional service with limited resources is beyond me. Thanks to sponsors, members, and the ACT Government for support. ArtSound always welcomes new members and volunteers interested in taking part in running the station, so get in touch.