Triosk played to a full house at Hippo’s last night. How do I know? I was left out in the cold with a changing group of others. Given it was a cold night (predicted -4degC, and it clearly reached it) I didn’t hang around for long. On the other hand, Hippo’s is generous with its sound, and you can clearly hear the band from outside, so I got a good listen for ~30mins, even if not a view.

Triosk are Adrian Klumpes (keyboards/samples), Ben 'Donny' Waples (bass), Laurence Pike (drums). They are touring to publicise their new album. They have received great reviews in Australia and Europe. They are jazz trained and are talked about in the same breath as The Necks, so I expected a different, although jazz-influenced sound. They have also recorded a CD with Jan Jelinek of Germany (1+3+1), which was interestingly done over the Net, and toured Australia with Jan.

I heard a gentle, minimalist soundscape. The show started with screeching cymbals from a stick being dragged around a cymbal. Then a slow bass line, with a lovely, biting double bass tone. The other member was piano, playing regular patterns and minimal changes. The drums grew, and over the next few tunes were very busy, with the bass and piano holding steady. There were sounds or effects, I guess from the piano, and later, very high pitched notes bowed on the bass. The drums had lovely loose tones. They seemed to be detuned, so the stick sunk into the skin, and the snare drum was played infrequently, and mostly (at least what I heard) with the snare wires out. I know they perform with laptop/s, and there were some sounds I couldn’t identify – perhaps PC-based digital effects, or sampled sounds interwoven with the performance. Hard to tell without seeing them in performance. And the performance obviously demands a great level of listening between players, as every note counted hugely. What I heard was an intriguing, beautiful and spellbinding performance.

But it was cold, so I didn’t hang around. I hope they return or I can catch them another time. But for now, a picture of some die-hards outside Hippo’s has to suffice. 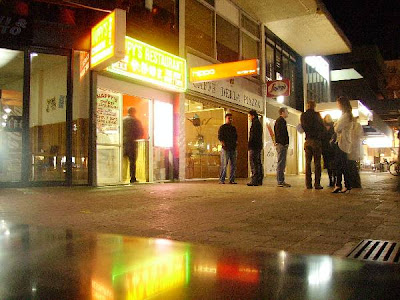