New York is a gathering place for jazz players from around the world. It has something like 10 major jazz clubs, and perhaps 100 venues for jazz. It’s still a mecca for advanced players, and the home of many famous jazz names. So jazz visitors from NY are something to look forward to. 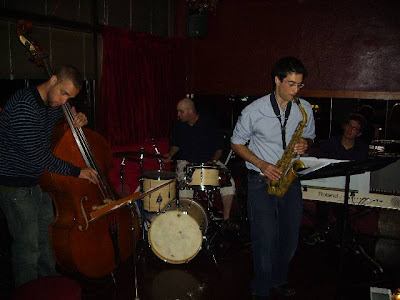 Hippo’s NY visitors were Jacam Manricks (alto sax), Steve Newcomb (piano), Jasper Leak (bass) and Danny Fischer (drums). Jacam is the leader and composer, originally out of Brisbane. He’s the son of professional orchestra-playing parents and has a impressive history of awards in Australia and OS. In NY, he’s currently working on his doctorate in composition, and earning as a jazz educator. So, he arrives with lofty expectations. But these are all Australians with NY connections. Danny and Jasper have been in NY for several years; Steve was in NY but has now returned to Brisbane.

So what is it about NY? I feel you see immense commitment and seriousness (that classic book of modern jazz, “As serious as your life”, comes to mind). Also, I hear original compositions with a hard, exploratory and energetic edge. I imagine that’s partly an expression of the individualist, live-or-die, competitive world of the US (which is presumably at a frenzied pitch in NY) and modern jazz itself. And obviously, high levels of musicianship and vigorous renditions of standard tunes.

JM’s band didn’t disappoint. JM’s original compositions were spikey inventions, with big intervals jumping up and down through sinuous melodies, often with syncopated, written rhythm section accompaniment. The piano solos were thoughtful and adventurous; the sax solos were initially non-legato, and developed into long, atonal flourishes; the drums solos were frequent, fast and disjunctive, with lots of rolls and rudiments finishing with frequent staccato slaps. I only remember one bass solo, but it was highly competent and interesting. I’d heard Jasper Leak’s album, and, as a fellow bassist, I was very happy to hear his name mentioned when the band started up. He was absolutely solid in underlying these hard charts, and an immensely interesting foundation. There were a few walks, one which appeared spontaneously in UMMG, and another lovely walk throughout Countdown. Otherwise, he played syncopated, rhythmically diverse lines throughout the night. I discovered something when I noticed how he would break up the rhythm, playing on -2-4, then perhaps 2-41-34-2-4, so the beat moved from the 2-4 to the 1-3 then back again, usually at unexpected times. It’s like a rhythmic version of playing substitute chords: not wrong but quite disconcerting. Great playing.

The non-originals were Sam River’s “Beatrice”, Stayhorn’s “Upper Manhattan Medical Group” and Coltrane’s “Countdown”. Otherwise, the show was all original. As I remember, the played Numbers 7, 3, 2, a medley of 4/5, and 1. Trust me; the compositions were more creative than the titles. There was some complex reading and writing demanded of all the players: good and interesting stuff. Check out Jacam’s website for a generous collection of his original music.

JM is playing at Wangaratta in a few days. I hope the band gets a larger audience there than last night’s disappointingly small one. They deserve it.