Last night’s White Eagle was a night of maturity in several ways. In the musical sense, it was a homecoming for two wayfarers and ex-Jazz School students, and both presented mature, developed music. In the performance sense, it was a big night at the White Eagle, with perhaps 150 people in attendance at the last show of 2006.

The crowd celebrated the end of a great first year for the White Eagle sessions. Earlier this year, several jazz students took on the task of presenting themselves and developing their own venue. Like Jazzgroove in Sydney, they’ve taken control of their own art through a cooperative venture. It gives Canberra a venue for performances by its own peripatetic offspring jazzers, and gives the current crew of developing musos a venue to perform, meet and jam. And the big turnout included the families of some of the visiting players as well as lovers of the art. So congrats to Ed, Phill and Hannah for the White Eagle success. 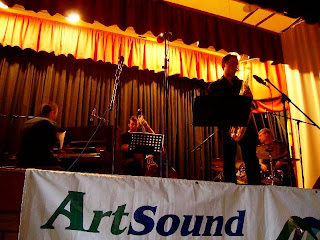 The first players of the night were the Niels Rosendahl Quartet. Niels has just arrived back after a year travelling in Europe and SE Asia, and further studying his tenor sax. He instantly impressed me with a new calmness and sureness in his presence; with clear and purposeful improvisations; with understated but nonetheless fast and complex lines; with clear and impassioned articulation. What he played was necessary, not just impressive. Niels had recommended a book to me the previous night, “Zen guitar”, as a good read, so it was no surprise that exuded a zen-like bearing on the night. He’s obviously developed immensely after time in SE Asia and Europe, mostly in Edinburgh. From the rubato start of “God bless ye merry gentlemen”, to another rubato section on the final tune, “Silent night”, the selections were apt and the performance was convincing. Otherwise the band played various original tunes by Neils and Michael A. 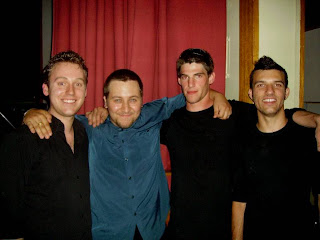 The band was an impressive unit: Michael Azzopardi (piano), Ed Rodrigues (drums) and Bill Williams (bass) accompanied Niels Rosendahl (tenor sax). Michael played with incredible energy and commitment as always; Ed was connected and interpretive; Bill was a rock with strong walks, and intriguing solos with a hard, clear tone. Ed told me afterwards that he felt all was inevitable and correct while playing with Neils. It showed. Niels finished the night by inviting John Mackey up for a minor blues, so it all ended with the local tenor masters at play. Niels continues to improve and impress; watch him. 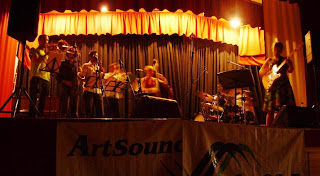 The Jess Green Septet was totally another proposition. Jess composes and leads a band with a broad, inclusive, world style. There were infectious rhythms borrowed from all over the place (rockabilly, blues, garage bands and reggae were in there, and she has a connection with, and influence from, Ghana). There were varied time signatures (7/4, 5/4, lots of triple times, 3/4 or 6/4, as well as the old standard, 4/4). There were varied harmonies and counterpoint in the 4-part horn section. So this was orchestrated music, of a modern, global style, with jazz leanings, and plenty of improvisation. What got me about the improvisations was the appropriateness of the solos to the musical context. As well as actively leading the band, Jess plays guitar. She did several wonderful, understated solos with soft picking and a bell-like tone on her Telecaster Thinline (the semi-acoustic model with humbucker pickups), as well as holding lots of rhythms with riffs or even simple chordal work. All the horns played solos, as did drums and bass. In one spot, there was an unusual combination of trumpet soloing against drums, then becoming more standard as the bass joined the action. Zoe Hauptmann is a great bassist, and I loved her immensely fitting solos on two tunes. Her match with the rhythm and groove and horn-based harmonies, and the spaces she left for the horn parts, were immaculate. I was taken by her great, solid tone, too. She works the strings hard, and the resulting sound is solid and dirty and endlessly reliable. I also particularly liked the varied harmonies from the horn section. The writing was good, and the players combined beautifully. And Chris T, sitting in for the night of drums, did a great job. So this was another mature offering; this time of original, contemporary, world-style music. 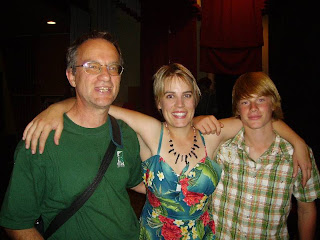 Jess Green with her Dad and brother

It looks like there’s no White Eagle session in January, but expect a return in February.