With soul @ The Soul

I caught Daniel Hunter’s trio at the Soul Bar on Friday night. It was the end of the week, wind down time for local office workers, time for a few beers, time to liven up for the weekend. This was the background, and I thought Daniel and co did the job wonderfully. The trio was Daniel Hunter (guitar), Bill Williams (bass) and Kay Chinnery (drums) and Max Williams (tenor sax) sat in from the second set. 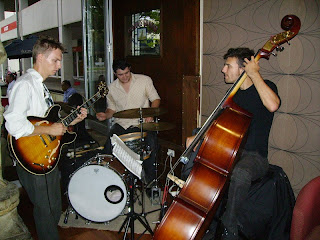 The first set was a series of standards played gently and capably at low volumes to match the early evening spot. The tunes were well known and eternal favourites like There will never be another you, Someday my prince will come, Footprints, and the like. The second set was much different: funky, bar-lively, louder and clearly upping the excitement level in the venue. I didn’t recognise many tunes here. There was a rocky, very changed version of All blues, and the others may have just been grooves. All were interesting. They sat in the groove well, the players interacted well, and the tunes moved and developed as they should. 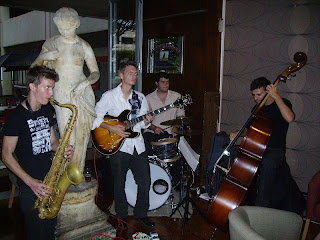 Daniel’s jazz education to honours level clearly showed. He plays a restrained style, accurately and with care. His melodies are crisp, and his tone simple and unaffected. But he easily and frequently ventures into harmonic substitutions with a clarity and purpose that confirms the fit of the excursion. And he equally easily dropped into funky mode with wah and such effects that so make that style. It was professional and satisfying, and often intellectually captivating. Bill played great, fat walking and syncopated lines behind the standards set, and plenty of capable solos. His playing is always convincing: sometimes simple, sometimes more difficult, but always appropriate. During the funky set, he easily dropped into the syncopated rhythms, and, as often as not, was the one to set up the tune with a funky solo bass line. Kay played solidly, and underscored this complexity with simple but correct and solid drums lines, and played several solos or interludes of his own. Max is Bill’s brother. I guess he’s a younger brother, but he played with considerable ability. (The Williamses are obviously a capable musical family). When Max arrived, the music changed (this was the start of the funky set). The sax provided another lead line, and Daniel was freed to join the rhythm section at times. To be expected, the excitement level rose along with the volume and the sound got a little more muddy. But all this is as it should be, and the joint was humming as I left.

It’s refreshing to have such good quality music available as background in the bars in own. Let’s see more of it. Keep music live. Great stuff, and thanks to Daniel.
Posted by Eric Pozza at 2:13 pm