A little piece of Africa

There’s an obscure album from the 1970s which is one of the first that I ever bought, and perhaps for that reason, one of my all-time favourites. The record (they were records then) was “Love from the sun”* by Norman Connors. It’s from the “Back to Africa” era, when black jazzers took to wearing coloured African skullcaps, appended African names (eg Mwandishi Herbie Hancock) and supported the Muslim Brotherhood. The concert last night by Mosaic, with a visiting master percussionist, Bandika Ngao of Kenya, reminded me of this era. Actually, the association is blunt: Kenya is 90% Christian and there are masses of musical styles throughout Africa. But the complex African drum rhythms, the centrality of vocals, and the sheer joy of both Mosaic and Love from the sun justify some association.

Mosaic was touring to release their new CD, and in Canberra for several performances for the Multicultural Festival. They are another excellent band out of Sydney’s Jazzgroove stable. Judy Campbell (vocals, some African instruments) convenes the band, and writes much of the music with Mark Ginsburg (tenor, soprano saxes, vocals, African drums). Other members on the night were Justine Bradley (vocals), Michael Carr (a visiting pianist from Austria), Brendan Clarke (bass), Jamie Cameron (drums), James Muller (guitar) and Bandika Ngao (percussion, vocals).

Mark Ginsburg opened the night with a quartet set (Mark, Michael, Brendan, Jamie). These were mostly originals by Mark. This was an earthy, rather than flashy set, and its authenticity was to set the scene for the rest of the night. There was good, strong swing, solid and honest, quality but not flashy soloing, some less common times, some nice unison accents by the whole band. 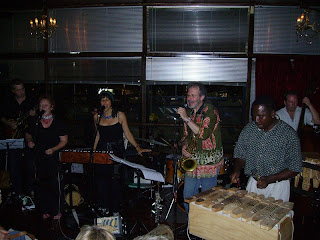 The whole band arrived for the next, blissful two sets. There was authentic African chant from Bandika, complex African rhythms from Bandika often supplemented by several other drummers, beautiful soaring voices, sometimes unison, sometimes three-part harmonies, great but never overstated solos all round. It was a marked change from the individualist approach of choruses and solos we usually hear at jazz clubs. I love that, of course, but this was communal, with complex rhythms growing out of multiple drum parts and rich vocals arising from simple but joyous melodies and equally happy and optimistic lyrics. The band was smiling, the vocalists glowing and Bandika beaming. These solos were integral to the music, so perhaps it’s not appropriate to highlight them, but I have to mention James Muller’s expert contributions which were frustratingly short, Bandika’s solos for his expertise and for the opportunity for those present to hear authentic, rich, African drumming, and a lovely solo by Brendan with his slightly edgy but rounded sound, accurate intonation and perfect suitability to the style. I found it a night of bliss. To end, they travelled out of Africa with a variation on a Jewish new year tune which you are unlikely to hear in your local synagogue, and then a final Brazillian-style tune called Meeting point. This was ecstatic and danceable, reminding me of Flora Purim and Airto. A fitting end to a joyous event. 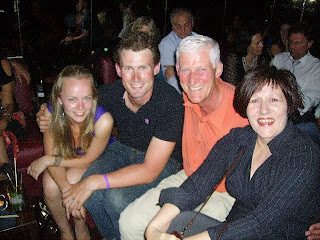 Strangely, the audience seemed to be different at Hippo, perhaps due to the involvement with the Multicultural Festival. I include a pic of some people I met. Interestingly, two of them are jazz bassists: Eric, visiting from the Netherlands, and Sebastian, who had studied with George Urbasek and Eric Ajaye. Small world.