It was another excellent night at White Eagle. It’s really turning into a great performance outlet for intriguing, challenging modern jazz forms. This night had two parts. First was the launch of a CD by Niels Rosendahl, one of our most capable recent students and now an international export. And a very different performance in a groove-based, fusion style by Greg Stott’s band. 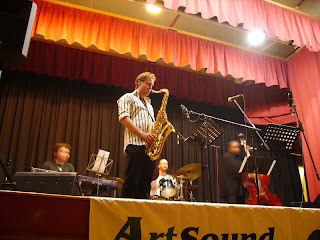 Niels Rosendahl presented the CD launch. The band was virtually the same as that which appears on the CD: Niels Rosendahl (tenor sax), Michael Azzopardi (piano), Eric Ajaye (bass) and Chris Thwaite (drums), joined on odd tunes by Anna Thompson (violin) and Jono Apps (trumpet). The CD adds Jonno’s brother, Luke Apps (trumpet) on one track. Niels played six tracks from the CD. They were all quality compositions, in a variety of modern acoustic jazz forms, ballad, latin, straightahead post-bop and the like.

Niels’ soloing displays a mature melodic intent these days. Solos seem to grow naturally from the underlying tune, rather than being forced over the top of a chord progression. It’s not surprising that his writing is also strong: melodic, unforced, satisfying. So his playing shows beautiful and fitting melodies with lovely use of intervals; flourishes and fast passages which are not infrequent but never forced; full use of the range and tonality of the instrument. In summary, it was a polished performance with considerable musical depth.

Michael played piano, rather than keyboard, in this context. It was rich and varied and inventive, as we always expect of him. Michael is always harmonically mobile, and his backing harmonies enrich the music no end. Eric is a master, defining and playing with grooves or laying down a fast, rock-solid walk, or soloing with real intimacy and relevance. Chris listens intently and interacts richly with the other players. He seems to set up a rhythmic and percussive sound scape in support of the others, but also solos freely on his own behalf. Anna joined in on two tunes, one where she plays response to Niels’ call. Violin is not a common jazz instrument, but she plays with a jazz sensibility, and it’s hard to avoid reminiscences of Jean-Luc Ponty, especially given her effected tone. Jono joined for a good, solid latin tune, where one or more trumpets was a necessity. It fitted fabulously, created an infectiously danceable salsa beat, and played a good solo to boot. 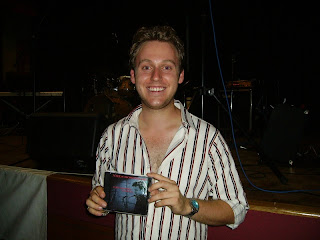 I bought the CD. First impressions are very positive. I’ve been immediately impressed by the maturity of both the composition and performance, the good sound, and the general competence all round. Apparently, copies will be available from Abels, or you can contact Niels through his MySpace site. BTW, Niels is returns to London in a few days.

The second set of the night was very different. Greg Stott is a jazz graduate, and is involved in the music training at the Jazz School and TAFE. He’s impressed me immensely in the past, so I was looking forward to this show with anticipation. 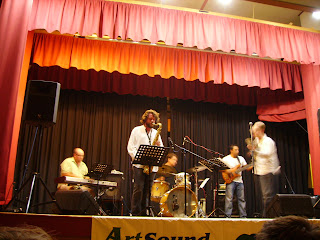 Greg Stott (guitar) led a band comprising John Mackey (tenor sax), Wayne Kelly (keyboards), Jason Varlet (bass) and Mark Sutton (drums). From the start it was full on, fast, capable and fun. The tunes were challenging. The blowing passages and the underlying rhythms were repetitive, but I find that’s the nature of this style. But the playing was supremely competent and the tunes themselves had interesting and well-played heads. This was a first gig of this combination with this music, so the sharp performance was doubly impressive. The tunes were all originals by Greg, including one very altered version of Ellington’s Caravan which still displayed some well-hidden evidence of its ancestry. I loved the title: Campervan. There was one tune that sounded to me like nothing less than a country-blues waltz (although a very sophisticated version). I heard Metheny melodies and West-Coast sounds in there, too.

The musicianship was of the highest order. Greg plays fast lines which generally seemed diatonic, but with variation and interest, and a sweet, pure Strat sound. John played his normal style of intensive solo, although I thought it was a bit less discordant than usual. Interestingly, when I started hearing some more discordant sounds, it seemed to me the band lifted and interacted more. Jason played fast, solidly and proudly on bass, using the whole panoply of modern electric bass styles (slaps, fingerwork, chords). His sound was great, too. His Warwick bass growled with a fat, middly sound and a clear top end twang. I could understand why Jack Bruce played the Cream comeback with a custom Warwick: it’s very much a modern version of the Gibson e-bass sounds of the sixties. Wayne soloed and backed with his normal panache and ease in groove styles. Mark played his role well, as he always does, although his parts were pretty simple and repetitive, but that's what this music calls for.

So there was great playing all around and it was obvious that it was well received by lots of musos and others on the night. They clearly are wonderfully competent players, do fusion fabulously well and play solid original tunes. Fusion's not my cup of tea but this is well done, so don’t miss an opportunity to hear them.

Well done Niels! A fantastic CD launch of pieces which are both spirited and thought provoking! Your recent travels have given your music depth and maturity. Your group of talented musicians demonstrate a refreshing musicality evident in the subtle quality of the double bass slow solo (“I’d Like To Know”) and the delicious combination of harmonies and balance between the violin and saxophone. The album displays an excellent use of instrumental colours and contrasts between frenetic virtuosic solos, your soulful introduction “I’d Like To Know) and the violin’s beautiful tone that evokes a haunting quality in “A Journey With Dad.” Congratulations on your foresight in using an instrumental line-up which sets your group apart from the standard jazz combo! Mira