I caught the Dave Rodriguez Trio today at one of their regular weekly gigs at the Belgian Beer Tavern in Kingston. Presumably the audience was of local apartment dwellers from rapidly urbanising Kingston. They were thirty-ish, predominantly wearing black, and included several parents with well-behaved toddlers or proud dads holding their very young offspring. So it was a pleasant if inattentive crowd for the band to entertain. The beer was authentic Belgian and on tap, and there was a general hubbub of quiet afternoon socialising. And it was a lazy, cool but sunny, autumn Easter Sunday afternoon.

So a trio playing standards was absolutely par for the course, and Dave’s band did the job with aplomb. The tunes were Green Dolphin Street, Darn that dream, There will never be another you, My funny valentine, and the like. It was lovely music, and well played, and obviously enjoyed. They all took plenty of solos, and played with understated verve. But it remained soft and sweet, gentle and restrained, as fits with this audience, and this time. 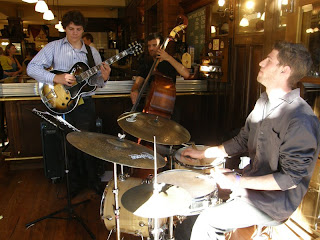 The Trio is Dave Rodriguez (guitar), Ed Rodrigues (drums) and Bill Williams (bass). Dave played largely diatonic solos with a clear, jazz sound. He threw in chords in several solos and played plenty of introductory vamps. Mostly good, solid, clear interpretations of the tunes, with occasional atonal explorations. Ed played brushes most of the time, displaying a flamboyant intensity which seems to me to be a trademark of his playing. Bill showed that calm attention which is so valuable in a bassist, freeing you to make all the changes and hold the steadiness of a walk or a rhythmic pattern. So, it was a lovely, restrained gig with much loved standards.