I’ve been incommunicado for the last 2 weeks when we’ve had the two biggest international jazz shows in Canberra for years. But the alternative was perfectly acceptable: travelling in Vietnam with family and friends. But your intrepid jazz reporter for CJ does not return empty handed.

I visited what must be the two major jazz venues in Vietnam: SaxN’art in Ho Chi Minh City (better known as HCMC or Saigon) and a return visit to Minh’s Jazz Club in Hanoi. Both are decorated with bright neon lights, both inside and out, so are hard to miss. 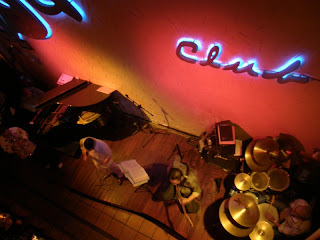 SaxN’art was disappointing. It was more a light jazz venue, at least at the time I attended, with an air of 50s sophistication. It was early in the evening, and it may hot up later at night. But a chat I had later in Ha Noi suggests most musos are playing this style, in hotels, bars, etc, for tourists and for the money. (Things are the same the world over, or as the Vietnamese commonly say to tourists, “Same same”). SaxN’Art a two story venue with a dress circle. We were upstairs, so the pic looks down on the band. They were competent players, and I especially liked the bassist. There seems to be a lot of opportunity to sit in in VN jazz venues, and the Vietnamese are a friendly lot. In the case of SaxN'art, there’s a standing open invitation for visiting musos. This time, there were several changes in the one set I heard: one sleek guy singing Sinatra style (“New York, New York” et al.), and a Korean guitar-singer sitting in for a basic rendition of Stormy Monday blues. Free entry, but prices weren’t cheap, so limit your cocktails when you visit.

I have already reported on Minh’s Jazz Club following a visit to Ha Noi a few years ago. I think I saw the house band then, and perhaps they were the same players that night. The band on this night was Red River. It comprised Quyen Thien Dac (tenor sax), Le Thoanh Long (bass), Ha Dinh Huy (drums), Vu Duc Tan (piano). 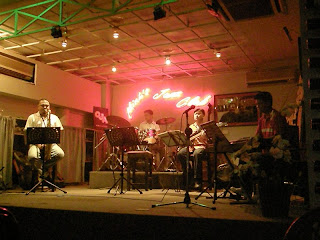 Red River (=Song Hong) is in its second generation, after the leadership was passed from Minh to his son, Duc. This seems so appropriate in this ancestor aware country. I heard that Duc has studied at Berkeley. Whatever, he plays a lovely, melodic, musical tenor sax. His solos can break into faster runs and flourishes, and can break out of tonality, but he works the chords mostly with beautifully chosen intervals to create oh-so-satisfying, cool melodies. He was a pleasure to listen to. The rest of the band was good support. I understand Long, the bassist, is a classical cellist, and his positional playing certainly looked the part. He played with strong, reliable rhythms and walks, but sadly no solos while I was there. Huy, the drummer, is capable and took several solos, and obviously enjoyed his playing. Again, this was professional, competent playing. Tan played a range of styles, from block chords to more interesting soloistic adventures. The tunes I heard were from the standards repertoire: Autumn leaves, Girl from Ipanema, St Thomas, Misty, etc. I would have liked to hear some originals, and apparently they had played some the previous week when they played in concert at the Ha Noi Opera House. But, regardless, I was enthralled by Duc’s excellent sax throughout. St Thomas was great. I always find it a bland number to play, and usually to hear, but this sax was rich and interesting, as Rollins must have meant it. Same same for the others: Ipanema, Autumn leaves, etc. Minh’s is well worth a visit if you’re in town, and especially if Duc is playing. 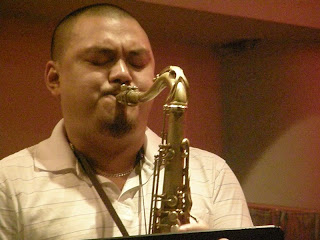 I spoke to the musos afterwards. They remembered visits by various Australians, and repeatedly mentioned the role of the Australian Embassy in promoting tours (here’s an opportunity). They specifically mentioned Scott Tinkler, Mike Nock and Nick McBride, and Neils Rosendahl got a mention too. I visited on the night Herbie Hancock was playing in Canberra, and they pointed out the pic of Herbie playing at Minh’s (apparently he only played one tune). From what I understood, there’s no tertiary jazz training in Vietnam, but there’s interest at the Conservatorium, and Red River comes out of that background.

We have now travelled twice in Vietnam with a great tour guide called Tuan Anh of Insight Vietnam Travel http://vietnamtourguides.com/. I’ll put in a promo here: deal direct, get great prices and intelligent, professional service. VN is the first country where I’ve travelled with a tour guide, and it’s so easy (after exploits in Egypt and elsewhere). But more related to CJ, it also turns out that Tuan’s wife, Hong Dung, is a professional singer on the Ha Noi scene. She knows Minh and the jazz scene, but works more in the “corporate” area. (Ya gotta make a living). As for travel, feel free to contact Eric at CJ if you want a reference for Tuan’s company.

And one last observation. Air Vietnam currently have Miles/Coltrane and Mingus as background music during boarding. On the other hand, JetStar (a perfect example of a commercially successful, modern, low cost airline) has some inane, endlessly-repeating clip from some catchy pop tune with the lyric “fly away”. Sadly, you’re more likely to travel JetStar.
Posted by Eric Pozza at 6:21 pm