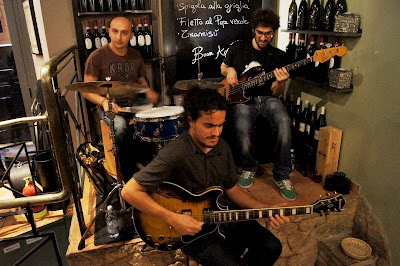 Finally some music again. We were walking up Via del Tritone to see the fountain (coperto, in restauro) and the sounds of jazz came from a pizzeria. This was Sunday night in a busy little locale. The band was a guitar trio. Nothing new or unexpected although some unamplified vocals from the guitarist did surprise me a bit as did the blues that got thrown in early in the piece. They called themselves Jazzette and they were a hot little trio. They went down well. I’d just read a piece from Branford Marsalis which basically argued that the general listener knows nothing of music and likes tunes they know. Most jazz is played for other musicians and their interest is harmony; the public likes songs they know, so they like melody. I noticed this as the band was playing some known tunes. My Mum liked All of me, and the audience responded to the sung blues and Ain’t no sunshine. I noticed Skunk funk and So what but the audience appeared a bit disconnected to those. I imagine it’s a brave muso who will finish with Ipanema, but these guys played funked-up jazz, so it fitted and was recognised.

Great little band. Tight, hot, plenty of melodic bass solos and some lithe and speedy guitar and light and responsive drummer from the most minimal of kits. These were just three guys funking it up in the corner of a pizzeria but they connected and entertained and were having fun. It entertained me as a muso but also the visitors. Well done. Jazzette were Vincenzo Totta (guitar), Stefano Napoli (bass) and Amadeo Rizzacasa (drums).
Posted by Eric Pozza at 6:09 am