One and two of three

The Loft featured a pair of guitarists with their bands. Dave Rodriguez was down Sydney with his trio DLR after a night at the Phoenix. Jack Ray’s ’93 Project was the support. And the Smith’s jam later in the night was to feature another guitarist, but more on that in another post. So how different can guitarists, and conceptions, be? Very different. 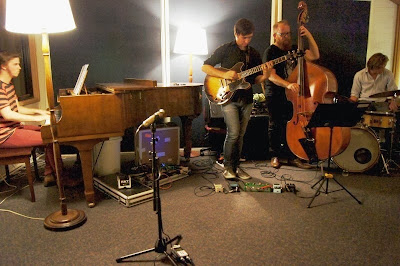 ’93 Project started gentle and moody with ballad-like chords and West Coast sensibility, Phill’s steady and determined and great-sounding bass and some cracking snare from Rhys. Jack has written the tunes and he laid out the heads with simple clarity on guitar, giving way to occasional effects, wah or overdrive over solos. The other main soloist was pianist Tate who can take a tune and express it in ways that are exploratory and expansive, but nicely unjarring. I was thinking while listening to Tate that most of what we hear is not new. I can almost say it’s all been played before; after all, there are only 12 notes. But good players interpret with a clear and fluent take on those existing, established themes, perhaps combining in their own ways on the day. Thus this quote: "In the final analysis, your stature as a jazz musician is determined not by how much you have practised, but by how well you have listened " Jazzology, p.195. Tate does this so well. ’93 Project is a platform for Jack Ray’s compositions. It comprises Jack Ray (guitar), Tate Sheridan (piano), Phill Jenkins (bass) and Rhys Lintern (drums). 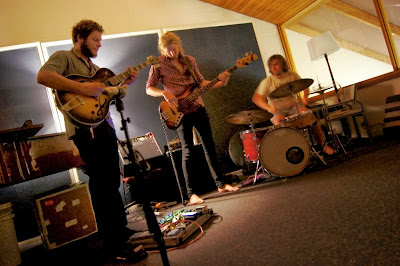 DLR is Dave Rodriquez’s current trio. It’s so different, even so entertaining. I laughed with joy and some nostalgia for this music. Think guitar trio, Hendrix with loops, Fender bass. This was crossover to rock. There were also hints of jazz in some solos, but more lanky bass and preposterous drumming. This was also loud, effected, sustained, looped. The whole felt produced, rich, full, although this was only a trio. The effects and loops bring this, sounding like a complete and recorded electric/electronic sound. Very much unlike acoustic and jazz and classics. It takes different knowledge and skills; it has its own expertise; it’s mostly music of other scenes. It’s a refreshing visit, thus my smiles of nostalgia. There’s nothing new, and this too has its precursors, but I wasn’t the only boomer who enjoyed this visit to a world of guitar and electronics. Much enjoyed. DLR is Dave Rodriguez (guitar, electronics), Jan Bangma (bass) and Miles Thomas (drums).
Posted by Eric Pozza at 12:37 pm