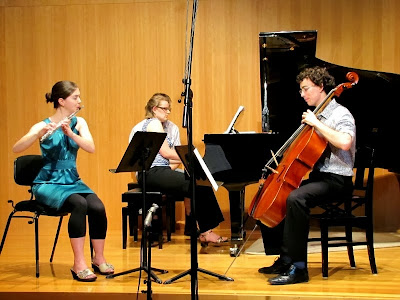 Jack Hobbs and Kimberley Steele returned for the second in their trio series, called Three’s a crowd, this time with flautist Rachel Howie. At the first concert, I noted the historical development. The developments continued so that here they arrived at early C20th. The music was still tonal but the melodies were distinctly different, anticipating or hangi, playing with rhythm, moving away for 4x4 structures and simple calls and responses and with more play on intervals. This was adventurous without dissonance, although a little of that also snuck in. Weber Trio in G minor was from an earlier romantic, but the rest dated about 1900. Poulenc’s flute sonata displayed this modern melodic sensibility, unexpected phrasing and anticipated pauses. Then two Czech composers. Janacek A tale which started fiery and passionate and later settled, and featured some unusual, extended cello pizzicato. Then what is apparently a standard repertoire piece for this combination, Martinu Trio. It was introduced as three movement, folks and Czech cultural influences, some light-heartedness. I could appreciate the humour but I also found it quite disjointed. I’ll have to revisit my recording, but I think Janacek was my preference. I was more impressed with the trio, though. It’s a good venue with clear sound and a decent piano and no interruptions, and maybe this was a motivation, but this trio was very satisfying. Grand and voluminous flute, sometimes delicate but lively and precise cello, and a constant certainty in piano. They are going their own ways, now, for further study and life. A shame but that’s how things go. This music was tonal but inventive and the playing was certain and sensitive. Very nicely done. Rachel Howie (flute), Kimberley Steele (piano) and Jack Hobbs (cello) performed at Wesley Music Centre for the second Three’s a crowd concert in the C100 series.
Posted by Eric Pozza at 7:34 pm