Ya gotta love it 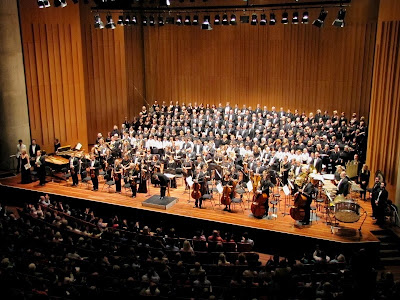 It’s Carmina Burana, of course. Everyone loves the brash and sensual audacity of it all. It’s used in numerous ads and films. It’s sexy and shimmering and speaks of lovs and student life and we all think back to that with rose-coloured glasses. It’s got a big orchestra and two choirs and lots of percussion and simple harmony with little development and malleable rhythms. It’s also one of the sure-fire pop hits of the classical repertoire. Perhaps some like it less given its frequency and pop presence. I spoke to a choir member who was sitting this one out (as she does the Messiah). Too boorish, I guess, too frequent. But I’ve only seen it a few times and I can still thrill at O Fortuna and the rest.

The Canberra Symphony Orchestra presented it with two choirs to a full house at the Llewellyn last night. There must have been 220 people on stage and it was a blast. I was surprised just how many themes are embedded in my consciousness. It must be borrowed even more commonly than I’d thought. I left enraptured but also considering the artistic environment of that time. Stravinsky is noted as an influence. CB is melodically and harmonically simple but very complex rhythmically, so I thought of the primitive in the arts. That path leads to Rite of Spring which was a sensation for Stravinsky a few decades earlier. And also to Gauguin's escape to Tahiti and Picasso's masks and newly discovered indigenous arts. They called this primitive and ethnic, but that’s only a European conceit. But they are pre-industrial. This was a convincing performance and truly impressive reading of rhythms. I felt some rushing at times, but I expect it was intended. The soloists were wonderful. I was particularly surprised by some falsetto baritone. Very competently performed. CSO and CCS can be proud.

There was other program, too. This was a German night, introduced by the German ambassador and sponsored by the embassy and German multinational SAP and thanks too to James Grieve who sponsored the Beethoven. Beethoven Leonora Overture no.3 was the first piece. Inevitable pastoral flutes, distant trumpet, sounding strings and the colours of Beethoven’s orchestration. I was taken by some semiquaver lines on bass and other strings. Beethoven does drop those lines in. Then Wagner Flying Dutchman, all bold and brassy with harp as rippling waters, and the stupefying Ride of the Valkyries. All led with energy by Nicholas Milton and an impressive competence from our our local players. Congratulaitons to all for an immensely entertaining show.