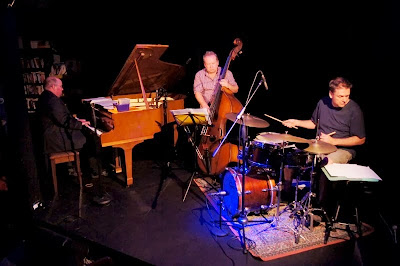 I left AYO for Wayne Kelly at Smiths, a short walk on a very hot night and at least some jazz for this blog. Wayne is one of our best local pianists and the crew was out, so this was a social event as well as a musical one. He's recording an album on the weekend and this was part of the warm-up. Old Canberra and School of Music boy, Brendan Clarke, was down from Sydney and Mark Sutton was sitting in on drums.

It was as expected although the were some surprises for Mark and audience member Mike Price with renditions of some of their compositions. Both were good. Mark's was Woden Tower, a capable tune, which always surprises me from a drummer. I was particularly taken by Mike's tune, Young guns, with a contorted, jerky head leading to solo space for young guns and others. They played several of Wayne's originals - Shanghai taxi driver, Mr Hank Jones, others - and a few standards. Brendan introduced Sophisticated lady with an obtuse sole that just hinted at the descending chromatic line. He was rock-solid throughout: big, softly toned but firm, constant and strong, playing inventive lines crossing strings with very independent fingers; just a touch of very mobile bowing and some excellent reading. A master, Mark, too. he was not outgoing on the night, but when called for solos, especially on his own tune late in the night, let so on some delicious fills and falling rolls with ready certainty. There's fingers in his playing, too. load and firm sticking controlled with delicate fingerwork. I thought of Wayne's fingers, too. His style moves through bop and modern and contemporary, chordal or single notes or runs, but always through cupped hands, left and right, moving up and down the keyboard, deceptively easily dropping on consonance or dissonance or melody or chords. Good players make it seem easy, but it's not, even after though mythical 10,000 hours of practice. Hot playing and a social event for the jazz community. Some of out best playing for some others of our best. Nice night. Wayne Kelly (piano) led a trio with Brendan Clarke (bass) and Mark Sutton (drums) at Smiths.
Posted by Eric Pozza at 1:13 pm