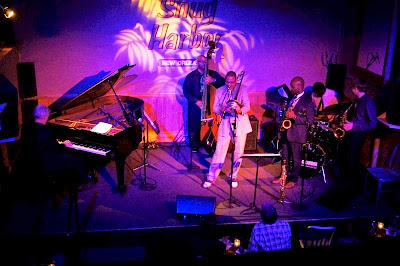 The Marsalis family are New Orleans sourced and I was lucky to catch Delfeayo on a Friday night at Snug Harbor. There’s nothing like seeing a big name international in a small club. He was playing a set dedicated to Miles Davis but not his fusion or later. As you’d expect, it was early era Miles, standards. They started with a very hard-swung take on Dizzy Gillespie’s Blue’n’boogie. Right from the early bars it was obvious that Phillie drummer Justin Faulkner was driving; no let-up here, so I was a bit surprised to find him playing so spare for some later tunes and with a wonderfully precise sense of time. Delfeayo played with such perfection, in intonation and phrasing, although it was only much later in the night that he moved away from neat and traditional tonal playing with a diminished sequence run following by a few bars of intriguing scale selections. His offsider, Khary Lee, was more adventurous in his soloing and the two formed a perfectly tight and harmonised little horn section. (In that vibe, Delfeayo had also led a big band in this club the previous Tuesday).

Bassist David Pulphus was a lithe bassist with a stormingly rapid walk but I could only guess at this for the first tune. Like the time I heard brother Wynton M at Llewellyn years back, the bass was miked with no pickup. It gives a true sound, but this is no studio. I couldn’t hear him for the first louder tune, could hear him well for the quieter numbers, but then only just heard him for later blowing tunes. The sound man told me he’d fiddled with EQ but eventually had conflict with the drums being within a few feet. But my favourite player of the night was pianist Victor Atkins. Piano lends itself to the most complex of ideas and Victor played with more harmonic and conceptual complexity than the others: more modern and more to my ears. After the Diz bopper, the Miles tunes were Autumn leaves, Caravan and My funny valentine. These were long and varied and superbly together. I heard Autumn leaves with variously funny and intelligent playing, some staccato chords and additional passing chords from piano. Delfeayo laid down some impressive long interval sequences with a fat almost-breaking sound and plenty of vibrato. In Caravan, Delfeayo played a pitch-shifted melody that created dissonance with the alto and the band even dropped into rubato free jazz and I enjoyed a perfect spareness on drums. I was stunned by how they always know each others’ place in the tune and how they resolved together. Lesser mortals drop a pitch or place a note so as to confuse their fellow musos who then move the one: the notorious train-wreck. None of that here. I was also stunned by the ease and invention. We all play these tunes, but this was nothing like I’ve ever hinted at. I could only sit back in wonder. The Miles recordings are like this, of course, but to hear it done live is another thing. This is when their international quality hit me. Then the last part of the performance lightened up with obvious entertainment value. Young tenor player Miles von Berry (?) was invited up, Delfeayo made a few jibes at his expense and they played the Sesame Street theme (complete with singalong) and the Flintstones theme. Both were decent outings and the Flintstones was an out-and-out blow with swapped eights and some collective improv. The final few bars had the three horns marching off stage and up stairs to the loft where I was located. Then cheers and good cheer all round, and wait for the 10 pm set. This was some truly amazing playing with a mobile sense of togetherness that astounded me; mostly fairly tonal although thinking back there was free jazz, piano adventurousness and collective improv. Entertaining and seriously capable playing.

This was on Frenchmen Street with its multiple music bars. As I left, I heard a bass-alto duo playing next door and entered for a listen. I just caught a few tunes before they finished, but I enjoyed them immensely. It’s an open chord-free and drum-free sound and they both played with vibrancy and a sense of adventure and plenty of groove. Nice and contemporary. I heard two standards: My shining hour and What’s new. This was mobile bass that truly took an equal role, a bowed solo, and responsive playing from alto.

Also, more decent busking on Royal Street as I walked to Snug Harbor. Tanya & Dorise were playing Bach: fine (classical / baroque / other) music was quite unexpected on the streets. They were playing light pop / rock when I walked home after the gig.

Sounds perfectly wonderful Eric, and an excellent write-up. Weather looks gorgeous too from the image of those night-time buskers.