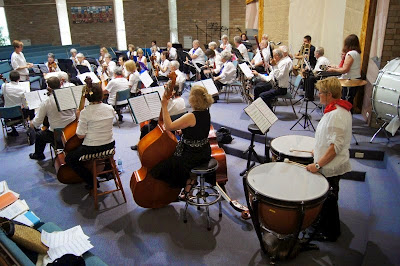 I missed the August Brindabella Orchestra concert due to prearranged travel but I was determined to perform for the November concert. I made it despite a thong-induced trip and resultant physio and a long pop gig the night before and little practice over the previous week to rest my left hand. But it was fun. There's little musical that will match an orchestra when it's in full flight. Brindabella has about 50 players and most instruments are covered. Our first violins were down on the day and there were a few visitors sitting in for ill members.

It's not auditioned, so the playing varies; there are music teachers, amateurs, returnees and the like. We can slacken during some harder passages, don't always play every note, determine that we'll do the dynamics better next time, but it's a blast. We mostly play excerpts, movements of larger works. This concert featured Beethoven Coriolan Overture, movements of Brahms and a superbly pretty movement from Schubert's little symphony in C major (no.6, 4th mvt), Carl Orff, Misty and songs and dances from Britten and Vaughan Williams. Great stuff; not too difficult but still a challenge. I fluffed a few, but there's surprising space to cover the errors amongst so many players. The basses missed a DS and were surprised when everyone kept playing, but at least we did it together. Great fun and recorded for posterity. And BTW, new members are welcome; practices Saturday mornings.

The Brindabella Orchestra was conducted by Rosalie Hannink.
Posted by Eric Pozza at 10:38 am