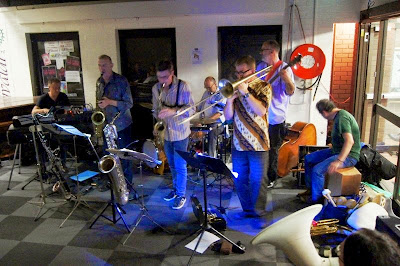 James Greening and mates came to Canberra and it was obvious the adults were in charge for the night, at least at the Gods. This was Greening from Ear to Ear. All light and jovial but supremely skilled and in command and well prepared. I wrote notes: respectful of tradition, deeply skilled, open, unpretentious, respectful, communicative (everything other Canberra- visiting adult-pretenders are not). But back to the music. The Gods is undergoing renovation, so we were in the Arts Centre foyer. More square, damply reverberant but nicely fat sounding with the audience. The band was close in one corner. This was a 7-piece band with three horns in front and the writing showed, as did the excellent musicianship. These guys are top of their trade and the harmonies were blissful and the grooves sat with precision, unstressed, seemingly so easy, but that's the skill showing. Playing music as it should be played is deceptively easy, but it takes years to master. These guys had it. These are Sydney masters and I was entranced. The first set was James' Tam O'Shanter Tales suite. He wrote the suite while in Tasmania and it's dedicated to the musical influences in his life: his family, Monk, his wife, Jackie Orszaski, with some less obvious insertions, like Parallel lines (a fabulous little big band chart) and Hazara (of more political relevance). I was stunned by the ease of interaction and perfection of the harmonised sound. These were not easy charts, but always played with easily but sweetly. Then the solos. I loved the Hammond tone from Gary and the fabulously twisting percussion from Fabian. James' solos were perfectly formed and Andrew's were a lesson in melodic statement, embellishment and development. I have admired his sax playing for years and I learnt something here on the night. Paul was more abstruse, less a matter of formal development than an emotional journey. Steve Elphick was sitting in for Brett Hirst and set some firm grooves and was nicely considered in his solo. I don't remember Hamish taking a solo, but every bar was rich with variation and connection. Another lesson. The second set was a few tunes from band members. Fabian played guitar on Domingo, simple descending chord changes over a medium tempo 4 with an Euro street vibe imparted by lovely accordion from Gary. Andrew's 22 degree halo featured Fabian's percussion solo that floored me with its delayed beats and falling rhythmic complexity (Latin training required). Then another then Lowdown, again from Andrew, funky with an odd count. There were changes of instruments: Rhodes - Hammond - accordion, or bass clarinet - tenor, or alto - baritone, or trombone - sousaphone - pocket trumpet (that's an odd combination and quite a challenge of sizes) or double - electric bass. All fabulously played, tight as, perfectly harmonised and blended. This was fabulous and about as good as it gets.