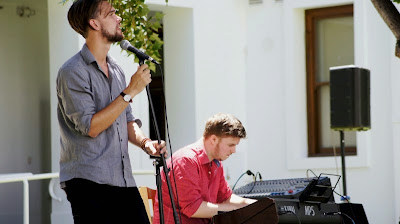 Tate was playing in duo at Old Parliament House Cafe for their Sunday afternoon jazz. Turns out he was playing with Liam. This is Australia Day weekend and there's sound checks for the big concert tonight and visiting bikies and the Sovereignty sign is well attended. And cops, little parking, free entry to the Museum. I heard one set of Liam and Tate and this was intriguing, skilled stuff. Tate is skilled widely, but I particularly love his sense of the historical, the bass lines and especially the swing and the honky-tonk right hand and the eminently comfortable stride. It was electric piano, but the feel shone through. And Liam. He's back from a year in NYC including singing at Dizzy's, no less. He's the genuine article as a jazz singer, twisting lines, singing unwritten chord notes, playing liberally with time. He was a pleasure, as was the duo. Relaxed, skilled, clever, but subject to big PAs being tuned and divergent other noise. I increasingly think this is the way for jazz and likely for any form that requires commitment and time and intelligence. The quick, to build and to forget, is increasingly the object of our affection. It's the essence of celebrity. Except maybe for sport that still demands the chops. As I drove to this gig, I heard on ABC (RN? NewsRadio?) observations that sport remained one of few growth industries in Australia (except carbon, surveillance, detention, and the like, I guess). Certainly jazz in Canberra is shrunken. How long has this been going on? Think jazz school and despair. But for the moment we still have some remnants, Liam and Tate amongst them, and we can only enjoy it ... till they, too, leave.

Liam Budge (vocals) and Tate Sheridan (piano) played and afternoon gig at the Cafe in the Old Parliament House. 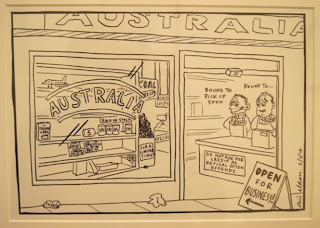 But in Canberra there's always the distraction of politics: not our politicians, but the politicians sent to us by the rest of Australia (Canberra is represented by just 4 Federal MPs - 2xReps, 2xSenate). The annual Behind the Lines exhibitions was on and I got some laughs on the way out. Just a few laughs. This is no time of joy. A few cartoons following the outpouring of emotion at Whitlam's death were telling. "Remember when politicians didn't just exist to meanly chip away at the nation? How remarkable having politicians that could lead and inspire and transform. To show us what was possible." (Thanks Gough / First dog on the Moon, in The Guardian, 21 Oct 2014). But I didn't get a good pic of that one. Here's one that tells a related message from a recent point of view: Open for Business / Andrew Weldon, in The Big Issue, 20 Oct 2014.