Last of a batch 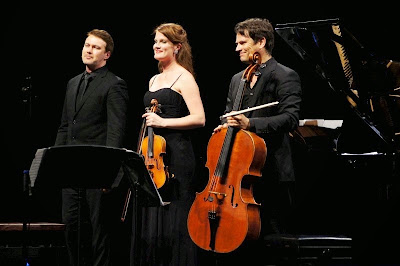 Trio Streeton was our sixth and last concert for this festival this year and it was delightful. We’re still talking of the variation in concerts: every one of the six have been vastly different. This final concert was classical / romantic, down the line. A renowned Australian piano trio (piano, violin, cello) playing Haydn, Debussy and Schumann, with an encore on our Aussie fave, Elena Katz-Chernin’s Russian Rag. The Haydn was his Gypsy Trio, no.39 in G Major; delicate, perfect, chamberly, pretty. Then a Debussy piano trio in G Major with 4 movements; cello arpeggios and passed melodies; introduced as an early work (aged 18 at the time?) and clearly that when you knew. Then a Schumann Piano trio no.1 in D minor, again in 4 movements: moody, mulling, emotive, intriguing canon in the second movement, a bouncy rhythmic theme and some deadly bowing; an emotionally composed and presumably mature work after the youthful work by Debussy. Then the encore that identified the LNL listeners (a moderate number clapped on announcement). The trio was great: expressive, uncluttered, nicely welcoming with their chatter. This is despite one replacement on the night: Teije Hylkema, principal cellist of the Australian Opera and Ballet Orchestra was sitting in. He did a great job. I wonder at the reading and preparation skills of such players, who can perform a challenging program at concert level and justify it presumably for just one gig. I liked this small format, too, with the few instruments of different timbres always clearly spoken and with evenly balanced roles. I tend to steer clear of the romantics but this was a delightful concert and I enjoyed it immensely. The historical venue and the Elena’s hugely catchy tune were just icing on the cake.

The Streeton Trio comprised Benjamin Kapp (piano) and Emma Jardine (violin) with Teije Hylkema (cello) sitting in for the night.
Posted by Eric Pozza at 12:56 pm