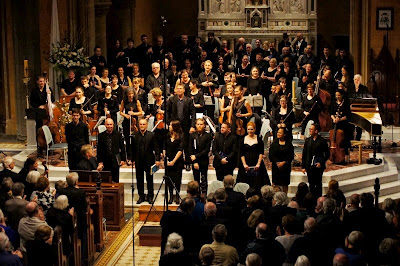 A mate has moved to Ballarat and we’ve discovered the Organs of the Ballarat Goldfields festival. It sounds quaint, but this is the 20th iteration of this annual festival and the opening concert is a rendition of Bach St Matthew Passion so we were drawn to it for the weekend. It’s an odd time for a passion, this not being Easter, but so be it. The location as good: an impressive stone church from the Goldrush era, St Patricks, built when, for 2 years, Ballarat was the richest metropolitan area in the world. I expect that’s how they can run a festival around church organs: there are lots of sturdy, impressive, imposing buildings here, including churches presumably all with organs.

That said, the organs for Bach were two portable baroque organs, with harpsichord, two orchestras, two SATBs and one soprano choir, a range of period instruments, traverso, theorbo, viola da gamba. So we had lighter string sounds and occasionally diverse tones. Of interest to me were two basses, one with each orchestra, one five string, another with C-extension. And an “Evangelist continuo group” and one smaller group that forms from the others to accompany Jesus. It sounded small in the big space to start, but our ears soon adjusted. We’d wondered if this would be truncated somehow, but no, this was the full 3 hours or so. It was sung in German, but the program had an English translation. I’d expected that following the script would interrupt the music, but no, it enlivened the story and the structure and highlighted the language that’s common to Bach and mass and Bible. And, despite Bach’s Protestantism, it’s a work that sits perfectly in the more ornate Catholic traditions, like the B minor mass that we heard recently. It’s a big work, choreographed with various solo singers moving to front and returning to choir. The busy Evangelist is up front, male, tenor, telling the story to Jesus’ bass. Daniel Thompson was Evangelist and he was fabulous, evocative and superbly voiced. Stephen Grant was Christ, central but less featured, well voiced and praised for his performance. Other characters were Peter and Judas and Pilate and a few false witnesses and Pilate’s wife and some others and the whole choir appearing as Jews who damn Christ and save Barabbas and sit in tears at the end which doesn’t quite reach the resurrection. Strange, that. So, in all: story well known; composition stunning and expansive and always dignified; performance impressive and sometimes breathtaking. A great start for a festival if strangely not utilising any of the (church) organs of the Ballarat Goldfields, but so what.