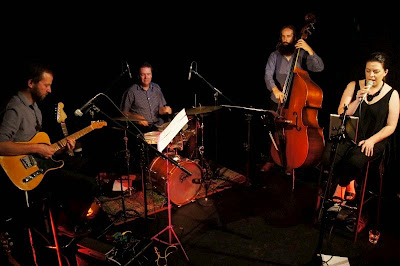 I've probably written this very report before when I last heard Rachael and her mates performing standards at Smiths. They are called The Here [not Hear] and Now now, and I think the name is new, but the playing and the songs aren't. That's their strength. These are some of Canberra's best, most seasoned, most busy performers and they have played innumerable times together and here they return to the roots and it's a huge pleasure, for band and audience. This is fabulously relaxed despite underlying energy; tasteful with ever-apt interpretation. Some of Canberra's political visitors falsely claim to be adults, but these guys exude musical maturity through depth of perception and communicative ability.

This is laid back. It's quiet: there's nothing to hide; nowhere to escape. It's sweet, unassuming and just plain right. Lovely ballads like Nearness of you of Shadow of you smile or Meaning of the blues; playful and accomplished like Centrepiece; light and joyous like Sunny side of the street or Squeeze me don't tease me. Even Flame trees, a dedication to Cold Chisel who were playing in town that night. And Afro Blue for the more adventurous. All so neat, so comfortable as a visit to selected standards. James excelled with his easy but richly melodic solos. Mark was unobtrusive but masterful. I was amused by his swapped fours with Rachael's scat; that's not a common pairing but it worked a treat. Lachlan was part of the duo with Rachael that's at the centre of this band. He touched on Bass VI and loops and a guitar ukelele (a little six-string that looks like a classical guitar but tuned up a fourth) but mostly played neat and a very thoughtful telecaster lines. Rachael was the heart and soul, voice and meaning, patter and laughter. She's so trained, so correct, so in control; what a pleasure. How nice all this is! Standards played by musos with the ability to share the stories. There should be more of it.