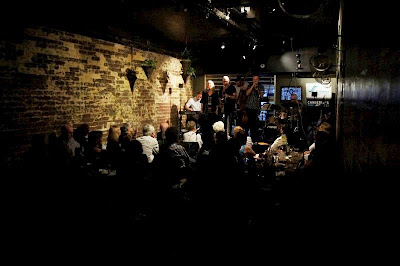 Mark Ginsburg was back with one of his very sweet and worldly bands. I've heard him a few times at Hippo and the Gods. He always has a wonderful, earthy, human presence and this was no different. This was his South African Project. It's a sextet with Judy Campbell singing variously as another horn and as a ballad diva. She said she enjoyed this, and I'm sure she would have. The horn parts were simple but perfect melodies, danceable and lively and hugely joyous. The ballads were similarly emotional, not so joyous, perhaps talking of lost love or the woes of apartheid or whatever, but always simply honest. This was African music and I guess this is what it's like, but it felt honest and revelling in life.

Black music at its source. There's a reason why jazz is rhythmic and Africa is one part of that. Mark spoke openness of South Africa, his current links with the continent and his youth in apartheid SA. It resonated with an audience that hung on every word. Honesty has its own rewards (Abbott and others, think on this!). They played earlier tunes, then some later that related to fusion and contemporary jazz. Abdullah Ibrahim ./ Dollar Brand was unpretentious and perfect. Fikele's delight spoke with the funky fretless bass of Bakithi Kumalo of Paul Simon's Graceland, Chaka Khan, Herbie Hancock and others, but this was the one tune that Brendan Clark (the Junior, without the -e) played on electric. Otherwise he was on double, with a lovely punchy solidity. A few tunes by Bokani Dyer were more of the contemporary style, giving Dave Goodman a lively and driving outing on drums; also a final latin by Chris Skilda (?). But then a few lovely ballads, Malaika (= My love) of lost love, and Little bird, written for Miriam Makeba. The horns out front were Mark on saxes and Eamon Dilworth on trumpet / flugelhorn, both expert in solos and eminently expressive in melody, and Judy sitting in as honorary horn. Ryan Grogan was on piano, a later student at Mark's school in South Africa and a deliciously understated player. What I will take from this is honesty and joy. It's not an image we have of modern-day Africa, mired in Boko Haram and poverty as we are reported, but this was honest and deep and vastly satisfying. Not just immense joy. Lovely gig.