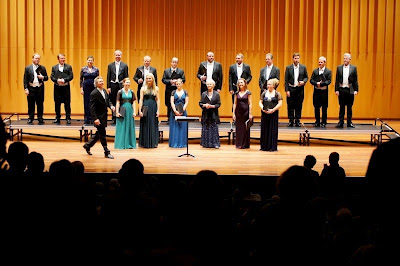 4+4+4+6+1=19 but who's counting. The Sixteen didn't add to sixteen but they were sublime anyway. This was early music but with a modern twist that took that early conception and twisted it but retained the themes and concepts. The early music was a string of Pergolesi and the Allegri Miserere. The modern kept the same Marian theme with works by Scottish composer James McMillan including another Miserere. The choir was a revelation for its ability to precisely spell the harmonies, and they were often very complex harmonies. Voices would to come to the fore then recede with perfect control and pitch, and these voices were truly splendid. Strangely individual voices that existed in a choir but had unique identities that would express themselves then dissolve into the choral patina. I was initially confused by the line-up. Is this SATB? Yes, it's in the program that way. Presumably Harry Christopher up front as conductor, with a string of six women in the first row: obviously sopranos. Then a back row of 12 voices with one woman. Where are the altos? I sing in a choir where females are half the tenors! I realised this was three males and one female as the altos. Another world! I guess these are male countertenors. Different. But gradually I relaxed into the beauteous presence of this early music and the modern twists from McMillan. All so perfect. All so English and refined. Ties and tails. That lovely soprano that soared. The Allegri Miserere with the second, distant choir in the wings. The simple presence of a superlative choir singing plainchant and its later inspirations. Simply wondrous and beauteous. Enough just to sit back and relax and think of my next visit to London and the museums and the classy culture and the rest.

The Sixteen performed their Queen of Heaven program at the Llewellyn Hall.
Posted by Eric Pozza at 10:18 pm

Email ThisBlogThis!Share to TwitterShare to FacebookShare to Pinterest
Labels: Sixteen