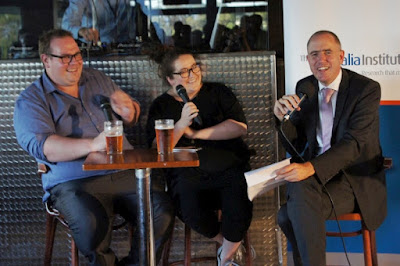 It was an end-of-year let-hair-down take on Politics in the Pub. An insiders' affair. Rob Harris and Alice Workman are journalists, for the Sun Herald and TripleJ, Murdoch and ABC. They present the Silent Majority podcast. I hadn't heard of them before but they are a hoot and are apparently a hit around Parliament House. It's not unexpected or unlikely. Parliament House is a close and intense environment and these things develop in such an environment. I should listen (I haven't) and I'd probably learn a lot: about the characters and their backgrounds and motivations. They mentioned names and stories and it humanised some of the most ardent of representatives. That's good. We do tend to understand our politics in a different, distant, argumentative way. This is all useful. I guess. But I noticed I was not the only one who felt a little out of the joke. A few people left early and I felt like it but didn't. Not sure I was in the mood for frivolity anyway. That's how parties (as in Christmas, not political) can be. There was talk of parties, quips of broken tables informed by insider gossip. All enlightening and interesting. The questionners were often recognised, as a journo for this paper or that radio station. I was amused when Mark Colvin asked the final question. I turned around, didn't recognise him, then listened. I knew that voice almost intimately but I am an ardent radio buff. There were insights aplenty, if expressed in a jovial, thankfully not ironic, way. About "chocolate-gate" (new term for me), Johnny Depp's dogs, knights and dames, eating onions (we all eat raw onions in salads if not as apples with skin), karaoke. Ricky Muir got a worthy mention as "the standout", which he clearly deserves, but the political class more generally got some support. David Leyonhjelm apparently supports freedom for nudity and even sex in public, not just guns and his Nanny State enquiry. Unexpectedly given the polls, Bill Shorten is still standing while his opponents are all gone. Then talks of odd couples (friendships/relationships esp across parties) in Parliament. I won't mention those here although they are presumably quite innocent and actually heartening. Who was how generous at their Christmas parties. The Greens and their "spill of the year" which no-one had any inkling of and the subsequent transformation of the party (not just Labors but "lots of Libs are very worried about diNatale" and his appeal to the educated comfortable classes - include me here). And various unexpectedrevelations, like John Madigan's awareness of issues in West Papua. Even a warning about locking up daughters. There were further mentions and questions of diversity in Parliamentarians, Annabel Crabb and Kitchen Cabinet, the NT port lease, Hockey as ambassador (and Kevin Andrews wishing for another), and finally Mark Colvin asking about journalism in the new Parliament House. It's an old story, how the Old Parliament House was small, how journos overheard mutterings (I hadn't heard about the toilet cubicle ruse after party meetings), how Abbott closed off the Exec Wing but it's reopened under Turnbull. Rob Harris was sensible or optimistic in arguing there are new opportunities and you have to go with change. But in essence, the pair had been sensible throughout although with many a chuckle. So the PitP year end with a party of sorts. I still felt somewhat an interloper but thanks for the invitation.

Rob Harris and Alice Workman of the Silent Majority podcast chatted with Ben Oquist at Politics in the Pub hosted by the Australia Institute.
Posted by Eric Pozza at 8:30 am