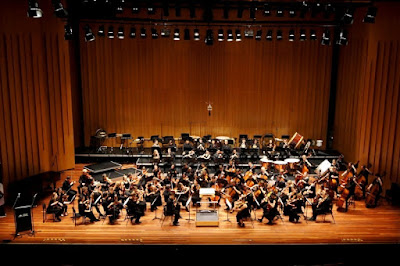 It's a long wait between drinks (beers) for the Australian Youth Orchestra to return to the Wig & Pen, or should I say Llewellyn Hall. Their National Music Camp is annual, but shared on alternate years between Canberra and Adelaide. 2016 is the year for Canberra. Canberra is strangely devoid of people at this time, seemingly more-so this year. I walked a possible ANU student-to-be through a very, very quiet campus (other than for an occasional youth in concert hall black). I'm told she's since chosen Melbourne, and given a campus and town so devoid of activity, I may have done the same.

But I know Canberra's actually more interesting than that, being national capital, home of 5 universities, highly educated, seat of the federal bureaucracy and Summernats. Despite the sonambulance, Llewellyn was alive. The first AYO concert was orchestral. The performers were just a little wary at first, but gained confidence by the bar. First up was the Smalley Chamber Orchestra with Handel Concerto grosso in C minor then Veress Four Transylvanian dancers. That second was new to me, with even the movements having strange names, Lassa, Ugros and the like. This was a very large chamber orchestra, playing in a large space and it worked a treat. Then the Bishop Orchestra under Brad Cohen with Ravel Rapsodie Espagnole. I realised how satisfying and big sounding can be an orchestra of 100-or-so players (eight double basses). It's bigger than any orchestra I've heard since some Mahler in London many years back. It was an immense pleasure to feel Ravel's swells fill the space so copiously. And such good playing from such a young cohort on these Spanish scales and rhythms. Then the Alexander Orchestra, under Erik Nielsen and similar sized, came back after interval with Schumann Rhenish symphony no.3. These guys are good, not just energetic and keen.