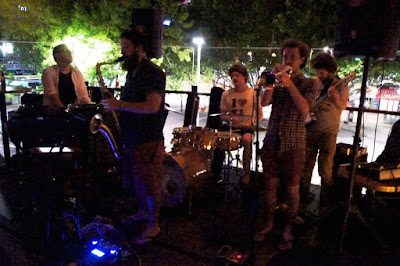 Career Advice were a madly demanding mix of counts and permutations. So that we remember to count, John Gould, my Maruki conductor, jokes that everyone he's ever met knows how to count to four. Career Advice is full of much odder counts and permutations and repeats and rabid syncopations and unexpected unisons and it was spectactular and mesmeric. Think this against a solid rock drum groove, admittedly often adorned, a fat low octaver bass, richly embroidered, and electronically enhanced Rhodes. Leader Lewis composed the music and led from his piano and it sounded electric but also floating and airy. Coloured and changing, the product of echo, overdrive and ring modulation, so the piano functions not just as percussive chords but modulates rather than just decays.

I mentioned low octaver on bass, and it was mostly deep and fat, but there were other effects there, too, and on cornet (Zoom something) and tenor (TCHelicon for echo, harmoniser, perhaps more). So this is a quintet with Rhodes and two horns but nothing like acoustic post-bop. This was processed, rich, full, ringing, contemporary. The insistent permutations and changes were trance-like despite the overlaid solos. The cornet took at least one quiet, meditative passage, virtually alone, and the playing was spacious, but mostly this was heavily grooved, expected but not due to simplicity. The set was a 30-min tune (perhaps a medley) then two more. "That got a little more hectic than we were expecting" said Lewis after the second tune, "I feel like slowing things down". The final was Deep expectations which started with a relaxed but searching unison line with bass harmony and cymbal colouration, but ended with a alternating twisted syncopations with swapped solo passages between tenor and cornet. Deep, heavy and absolutely involving in the way metal can be for its adherents. I was taken. Just fabulous.