Pleasurable beer on a hot day 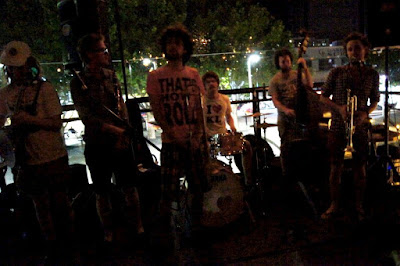 What a good night was promised at Hippo and how good was it? It was a double bill, sharing a few players, all out of Melbourne. First up was trad from the Lagerphones. Cornet, trombone, clarinet for the concurrent soloing and various others. These three also sang, sometimes leads, sometimes in three-part harmony. Chordal accompaniment was the chuck-chuck of banjo, with bass and drums. I don't hear too much trad, but it can be a ball. This band moved over the years, I think. There were 2-feels with polyphonic solos, various solos with backing from instruments or perhaps voice, lines that were harmonically simpler, more arpeggiated than linear, four-on-the-floor kick and snare rudiments, cheesy lyrics, several originals. But there were also some touches of the modern: walking bass, a reggae tune, even Paul Kelly's song, Darling it hurts. Now, that was unexpected, but this is a Melbourne band and it's working and they mention "a desire to get out of the dimly lit jazz club and onto the sticky carpets of their favourite pubs". The swing dancers were around, at least for the more tradie or swinging tunes. But Hippo was full and people were smiling and the band was pumping. I didn't mention the capable playing all round. I particularly liked Ben's cornet and James' trombone and Jon had a particularly nice voice. But I took this as fun and it was that in spades. Great stuff and particularly great as a change for a died-in-the-wool modernist. 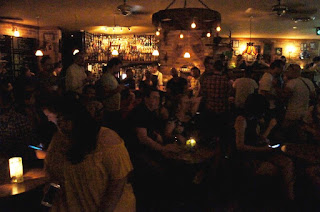