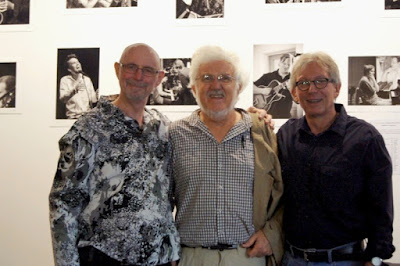 Brian Stewart launched his latest exhibition of jazz photographs at Smiths on Friday night. I must thank him for asking me to speak. Congrats to Brian. Here is my talk and a few pics of musos before and after the exhibition: a classical pianist outside, and the Collingwood Casanovas who played after.

Thanks to Brian for asking me to launch this exhibition. I'm Eric Pozza, writer the Canberra Jazz blog and maintainer of CanberraJazz.net. I've known Brian through jazz several years, not least as a fellow member of our mature quartet of reliable listeners.

Brian's exhibition is entitled A Golden era of jazz in Canberra - 2009-2012. I first read the title as The and I was pleased to realise Brian actually called it A golden era.

Geoff Page spoke to me once of the then current golden era of jazz in Canberra, but I thought he went back further, perhaps 15/20 years. For the last few decades and for Brian's period, local jazz is largely a story of the School of Music, although there was some other jazz outside the school, eg, Hippo, AFATM. Before that jazz history was the Jazz Clubs (2 incarnations), jazz festivals, trad jazz (see John Sharpe. A cool capital: the Canberra jazz scene 1925-2005)

It's telling that all these photos are of people associated with the Jazz School / School of Music as students, teachers, graduates.

There are only ~20 pics so they can't record everyone. Who are they? The students are Tate Sheridan, Calum Builder, Luke Sweeting, Joe McEvilly, Victor Rufus, Liam Budge, Rachel Thoms (student at the time), Tom Fell and there are others in the group shots. Some are still here, others are touring (even with Elton John, no less) or practicing further afield or now teaching. The teachers are John Mackey, Eric Ajaye, Miro Bukovsky, who all came to Canberra to work at the School of Music. The others all happen to be Jazz School graduates: Wayne Kelly, James Luke, Greg Stott, Mark Sutton. There are many others who don't make this small collection of photos, from this period and before. ~20 pics can only reveal so much. And most are associated with the SOM as teachers or past students.

I also see in these pics the flowering of venues over this period, so this is era of venues and visitors. The Loft (thanks to Luke Sweeting and Tom Fell), ANU venues, The Gods (thanks, Geoff Page), early Smiths, Street Theatre. Is Calum in the Old Parliament House garden? I see Tate is in front of this very wall hanging here in Smiths.

And the visitors who came for the School, to perform or teach, or to return home to see family, or to tour Eastern States. There are fewer coming now. Many from JazzGroove, Sydney, Melbourne, Australians on tour, some coming from OS. I remember names like Linda Oh, Jacam Manricks, Eric Mcpherson, Ambrose Akinmusire, Bill Cunliffe, John Riley, Eugene Wright, Eric Harland, Bad Plus, Bennie Maupin, Sean Wayland, Mark Giuliana, often heard in the Band Room at the School.

Jazz is a small community. Often our best musos are out making a living with weddings, teaching, corporate gigs. That's probably why jazz happens during the week: the musos are working for real money on weekends. We need the musos but we also need the supporters of creative music for it to survive (some of whom are also musos) eg Tom and Schoeb and Geoff to organise gigs, Brian and John Sharpe (and me, I guess) to record, Chris Deacon and ArtSound to broadcast, and perhaps most essential, the listeners: my Gang of 4 (Brian, Keith, Geoff, me@Smiths) and many others who attend

And what of the photography?

Brian has maintained an online photography collection for many years, covering jazz since ~2007 but also other themes: landscape, people. This is Cyberhalides, referencing silver halides and the traditional negative, darkroom printing process of black & white photography.

And the technical matters?

From Brian, we can expect sharp monochrome, shallow depth of field (common in his jazz photography under low light), plenty of contrast, raw imaging and post-processing, snappy glorious printing. What of his photographic eye? See how he sets off people and locations. The photo of Tate mirroring Larry Sitsky is an opportune work of genius - how lucky is that? But in photography, like in much else in life, you make your luck. Or how he captures the moment. See Liam's vocal engagement, Eric's drive and commitment, Miro observing John's thoughtful tenor investigation, James playing while watching Mark, John musing on Greg's solo. That's a reminder for all musos: to listen, to watch, to stay attentive to the other musicians you are playing with.

And something I like in a photograph: Brian is discreet. It's a key skill in photographing people generally, and in not annoying listeners. Using a silent camera where required, timing SLR exposures so as not to invade the sound, moving unobtrusively to set up a pic.

Getting back to the music ...

This all reminds us of the ANU School of Music, of course. Brian's namesake, ANU VC Brian Schmidt is instituting a community consultation and report process under Andrew Podger (Larry Sitsky is one advisor). We should all consider how we can input and hope for a positive outcome. As an aside, it's interesting that Brian Schmidt first came to Canberra with the Alaska Youth Orchestra and played in Llewellyn, so that's something hopeful. Maybe there will be another golden era to come.

And another hint of renewal is that we now hear of the return of regular Thursday night jazz to Smiths from February. Good news and thanks to Nigel.

For those who are in these photos and to Brian who has made this record, thanks for the art and the entertainment, and let's all hope for a resurgent jazz future in Canberra.

So, with this champagne across the bow, I launch Brian's exhibition ...

Nicely done Eric ... and good to hear Smiths continues. I wasn't sure what had happened to it in recent times.