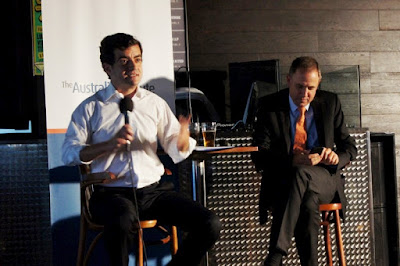 Sam Dastyari spoke at the Politics in the Pub and I agreed with all he said but I remain unconvinced. It's relevant that the first question was from Ben Oquist, now head of the Australia Institute, referencing how he moved so far from the political warrior of the NSW Labor Right to this almost-Marxian position. Strange, that. Not impossible, of course, but worthy of some reticence. SD is young (now 33?) and has been involved in Labor politics at an organisational level since age 16, so he's had time, and it's a common enough thing for people involved in politics to change ideas, often markedly. They live with it every day; they think it; they should be prepared to honestly reconsider positions. So where is he now? He spoke about "Who really runs Australia". He had thought Parliament, PM, institutions have that power, but PMs change (recently very frequently). His answer is the major companies. He mentioned 10 (four banks, three miners, two grocery, one telco (you can guess the names) but I expect it could expand to the BCA group. He told of being shocked on coming to Canberra, of changing ideas of where power resides, of marketing budgets for political causes and ubiquity of lobbyists. He argued not just that they have influence, but that they drown out all other influence. He reminded us of the richest 7 Australians having the wealth of the bottom 20% and similar stats. Interestingly, he said the answer is in the market, through increased competition (I'd add, for influence, not just profit). He reminded us of bank corruption and lack of action and FOFA, of the mining campaign against the "super-profits tax" (which would actually have helped smaller miners, but at the cost of the biggest players). He mentioned the fightback in support of FOFA, by COTA, Choice, Seniors, victims, Australia Institute. He suggested things are boiling, the public is seeing though the marketing lines, anger and frustration is building as shown by politics outside parties, of left and right: Bernie Sanders, Trump, Jeremy Corbyn, National Front, Golden Dawn.

Then questions. We need more than a Federal ICAC: he suggested a Serious Fraud Office to investigate public and private fraud (apparently the UK has one). There is always resistance to giving up power; Labor must change or be "part of a shrinking pie". Previous exposure to power is useful to recognise power in Parliament, but his experience didn't prepare him for the Commonwealth Parliament. Tax is "boring shit" but essential for fairness. An example? The largest cleaning company in Australia pays less tax than each of its cleaners (!) [I can only think of Warren Buffett: "There's class warfare, all right, but it's my class, the rich class, that's making war, and we're winning". Quoted in "In Class Warfare, Guess Which Class Is Winning" by Ben Stein, in The New York Times, 26 Nov 2006]. He argues the suggestion that multinationals will leave Australia because they are taxed is bunkum: they are here for profit and profit is what is taxed. BTW, he doesn't query tax or making profit - he's actually no Marxist - but he does argue for competition and distribution of influence. He sees the big local corporations as more the problem than multinationals. The solution? The "market-based solution is a competitive environment". ACCC does great work given its "devastating" budget cuts. The "effects test" would have been good for competition. Another example: credit cards, where interest may be 22% while the cost of money is 2%. Surprisingly and interestingly, he argued that the Labor's centre left had been very successful, referencing the timespan post 1960s. Healthcare, education, multiculturalism and finance matters were on the agenda under Whitlam and are essentially in place (an interesting view and impressive evidence: we are different from then). But the centre-left needs to think where to next. He suggests decentralisation of power. There were questions of the decline of institutions, not least Parliament and Public Service, but maybe times have changed and institutions are not natural, but can change (another interesting thought). In response to a question about Murdoch and News Ltd not being in the "Top 10", he spoke of dominance, but shrinking power. Then of employee empowerment in the past by awareness that they kept their jobs with profits; but now managers are measured on an ability to restructure to reduce visible profit and tax. The High Court's latest decision on refugee returns to Nauru and the US 14th Amendment was raised; the debate is "so polarised, so emotional" that conversation is impossible. And a final few words on decentralisation of power and the twisting effect of fund raising (eg, US pollies spend 85% on their time on fundraising, so influence is inevitable, even without corruption). He admitted his major fund-raising role in the NSW Right.

So, his thoughts, or at least his words were good. I remain skeptical, perhaps too cynically, by this easily spoken pollie, but I'll watch and listen more over time. Certainly, I liked what he said and I was not alone in that.

Sam Dastyari (Labor, Senate) spoke at Politics in the Pub for the Australia Institute.
Posted by Eric Pozza at 9:26 am