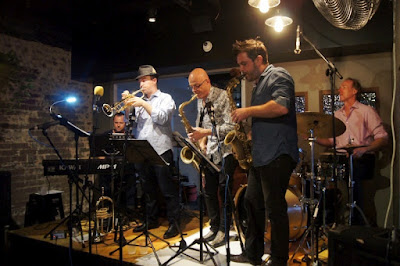 Jason Bruer introduced his band, Hammerhead, saying "it's the music that turned us all on to jazz". They were playing hard bop, a tribute to Art Blakey and his Jazz Messengers, some originals in the style and with a format to suit, piano bass drums as rhythm section and a front line of three horns, trumpet tenor alto. It's somewhere near how I came to jazz (more closely, it was Dizzy and bop, ten years earlier) and it's a style I still love immensely and, from the reaction in the audience, is loved by many. This concert went down a treat.

Lovely harmonies up front, big fat tones from the three horns; a driving, unyielding, regularity from the drums and deep groove from bass and some rich harmonic colour and intriguing rhythmic hits from the piano comping. They mostly played walking swing but there was funky fours and six feels and some lovely '70s modern jazz syncopation as well. The first set was all walking fours, at least in the solos. The heads could be sycopated. Wayne Shorter The Summit and later Hammerhead and Jason Bruer's homage, Wayne's world. Bobby Timmons' famous tune Moanin' worked so well with this combination. Then a bittingly fast head on Jason's Breaking bad. The second half had more modern feels, if still in the tradition. An Eddie Harris tune was funky and Joe Henderson Power to the people was a syncopated 8 feel. Pat Metheny Sometimes I see was a lovely ballad. Jason had two more originals. I loved Sixth sense, a 6/8 reminding me of my formative album, Norman Connors Love form the Sun. For Art's sake was another post-bop dedication and a finish on Cedar Walton Mosaic, an up-tempo post-bopper. This was manor from heaven for me and obviously many the in audience. This music is so approachable and attractive: individualist in solo; supportive in coming; satisfying in fat melodies. And the playing was a dream. Post-bop likes a simple, stated phrase for development. Ray was playful in this; Kim was rich and full (someone mentioned good lungs on young players); Jason was more obtuse and abstruse. Nice combination. Duncan on drums was absolutely steady, unwavering, not overly busy with embellishments. Brendan is an unstoppable force and proved it again in accompaniment, as well as laying some detailed and quick solos. Greg's comping was a dream, intriguing and coloured, both leading and responding, and solos were to match. He took one solo passage, unaccompanied, dismantling and reconsidering, before returning to top. Nicely done and quite a change. As my foot tapped and I thought of the variation on unyielding groove, I wondered if this was the dance music of its days. Great stuff and much enjoyed.