Both sorrow and joy 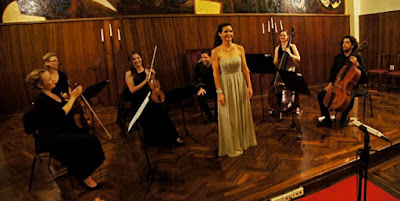 It's coming on Easter (another nebulous reference to Joni Mitchell) so it's time for the dolorous strains of the Stabat Mater. Not something to josh about. Stabat Mater dolorosa is a theme that's widely composed (600 versions is mentioned in the program): intimate and profound, a recounting of mother Mary below the cross of Christ. With any mother it would be a painful image. We heard Boccherini's 1781 version to text attributed to Jocopone da Todi for the 13th century. Sara Macliver sang with accompaniment from the Australian Haydn Ensemble. A work of ~45 minutes of both sorrow and redemptive joy. I found it surprisingly uncomplicated musically, or at least technically, and maybe that's apt for real passion. The rest of the program was Mozart and Boccherini. B's Flute quintet in G minor, then a string of arias and the Divertimento from strings in Bb from Mozart. One aria, Laetari iocari from Apollo and Hyacinth, was written by Mozart at age 11 (!) and was a bravura demonstration of quick, neat and accurate voice production, fast arpeggios and terrific control. It was fun to hear the ex-chorists in the break lauding Sara's control. The AHE is always a huge pleasure, bringing together informed programming and wonderfully capable playing of the baroque and early classical repertoire that it explores. I particularly follow Jacqueline on bass for her delicate phrasing and some awesomely rapid lines when called for. Also close to the bass end is Anthony on cello, playing with careful distinction. I loved one line well into the thumb position that he played unison with first violin and musical director, Skye. It was intriguing to notice how he prepared for a line, quietly plucking a string in the background to ensure a prominent entry pitch was right. The two violins, Skye and Simone worked neatly together. I find it intriguing to compare tones of violin pairs in small ensembles like this and I've noticed the differences before. In this case, Skye's tone appeared more mellow than Simone's. James rounded out the strings on his new viola. Lovely to hear the embellishments of harmonies from this internally placed instrument. Melissa played her period flute on several works, not least the flute concerto, of course, but not for the whole program. I immensely enjoy this tone that works well with gut to place the sound of the ensemble. AHE is drawn from all ends of the world: based in Sydney; Sara was invited from Perth; Jacqueline and Anthony are now resident in London but relatively frequent returnees. Another wonderful concert from these mates. The next Stabat Mater for me is jsut a few weeks off: Pergolesi's with a few excerpts from Vivaldi's by Adhoc Baroque on 22 March.