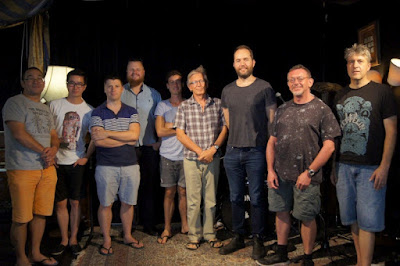 This was an unexpected workshop. Will Vinson was touring with some of the best players in Australia. He's English, living in Brooklyn, educated at Manhattan SOM, playing with Ari Hoenig, Mike Moreno, releasing an album entitled "Live at Smalls", shared a house with Orlando Le Fleming. Enough said? He's a sax player but I wasn't going to miss it. The limited advertising showed in a small turnout, but it was intimate. I read the message as essentially return to fundamentals. He spoke of playing quarter notes; that bassists know time best; play roots in a form for 30 mins then up the metronome a few clicks. Time was key: he could listen to someone with weaker harmony but good time, but not weak time. He spoke of knowing 3 tempi: fast, medium and ballad, but really just knowing one: the medium is half fast and played with 16th notes and the ballad just slower still, not felt as balladic. So, practice with a metronome at different tempi (or play with recordings) and expand your time repertoire. Swing can change with different players - Branford Marsalis swings although his 8th notes are more even than Cannonball's. So, get those quarter notes working. Practice several things at once, eg, time and form, or form and harmony. A good quote: freedom in jazz may be just a fig leaf for bad habits; think conflict of muscle memory and creativity. Then some work on polyrhythms. He plays with Ari Hoenig and mentioned some of his great skills. Like 7 over 4 over 5 and how it plays out. We practiced singing All the things you are over 2/4 then just 2 then just 4 then dotted crotchets, then over 5 beats over 4/4. Things were getting less confident. all good for feeling set time over variations. Then something on harmony, bop scales, 7 note scales transformed with added chromatics to 8 to match chord notes to strong beats. But this can sound dull, tired, requires a sense of creativity to inform it. Like Horowitz, think to the end of a phrase, not just the start: we tend to run on. He demonstrated with a melodic idea, played as 8 bars, 4 bars then 2 bars. The idea itself was 2 bars; the extensions were the rest. (I liked the four bar line). "You only hear a melody when it's over". "This will never happen: listen to your own recording and wish you'd played more". (How eternally true is this!!!) So state a phrase, stop and listen, create. How does he practice? Lots of quarter note work (for time sense); Spend time learning by ear; identify habits and learn to control them (observe your playing). All great ideas.

Will Vinson gave a jazz workshop at Smiths.
Posted by Eric Pozza at 8:57 pm

Email ThisBlogThis!Share to TwitterShare to FacebookShare to Pinterest
Labels: Will Vinson

Wow! this sounds great, would love to hear it if anyone recorded the workshop?

There was an H4N. Not sure whose it was