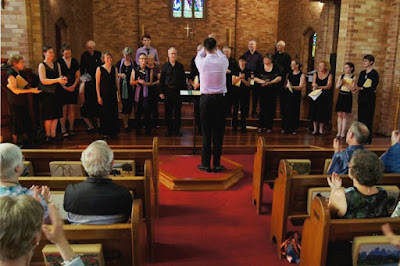 "The last time I saw Richard was in Detroit in '68 and he told me / All romantics meet the same fate / cynical and drunk and boring someone in some dark cafe". I could continue and it's a formative song but I won't. The last time I heard Fauré Requiem was NYC in 2011. It was the 10th anniversary of 9-11 and we happened to be in town and there was memorial music everywhere. Plenty of choirs; plenty of deeply connecting music. Where? As I remember, Grace Church on Broadway, an Episcopalian Church. 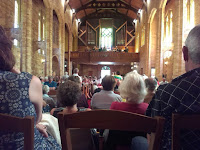 A lucky and unexpected find. We caught the last 20 mins or so and we were warmly welcomed. Episcopalian is High Church Anglican for us. And so it was for my second Fauré Requiem. This was St Paul's Anglican, Manuka, with Igitur Nos. A very fine choir, led by Matthew Stuckings, singing Fauré Requiem, but before that, Britten Hymn to St Cecilia and Vaughan Williams Mass in G minor. A fine set of religious musics. I need to listen to Fauré more. It is a core repertoire item, but I haven't connected yet. The VW was different. I connected from the first notes. Softer than the diversions and canons of Britten; soft, smooth, meditative, blending voices and plainchant introductions. This seemed settled into its milieu; part of a grand tradition, openly and simply. I liked this. The Fauré has more variation; perhaps it's more mournful and sparse. It was sung from the organ loft and the balance was hard to set and the voices were somewhat distant, but this is ethereal music, touching hope for some passages. Igitur Nos is a great little choir doing a fabulous job on the choral repertoire. I admire them, now knowing something of the skill of SATB voices. Those soaring sopranos; those beauteous harmonies, gentle and inviting; the occasional solo voices. Religious choral music does what's it's meant to do, to invite you to confirm faith, even if we are a bit long in the tooth for that after rationalism and Pell. But so beautiful.