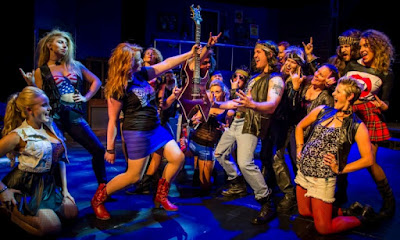 I played rock music once, but it was earlier than the '80s. Rock of Ages was a musical about '80s rock, the perennial mystique of sex and drugs and rock and roll. I watched people laughing with gusto and wondered if they watch daytime TV and listen to classic rock radio. Suffice to say it's not my scene, but you know what, I enjoyed it in the end. It's set in Sunset Strip, LA, a high-life slice of Sunset Boulevard. We drove along it once. During the day. We stayed just out back of Hollywood Bld. Ugly but with stars and red carpet when we drove out in the taxi. All strange, this world. The rock world, too, has its own ugliness and authenticity. It's not a place for feminism, at least given the skint costumes on the dancing girls against the daggy jeans on the blokes. Probably always thus. The skint costumes covered for the strip club as well as the dance floor, so apt, I guess. The band was 2xguitar, keys, drums, bass, conductor (? ... but this is musical theatre). The story was of a long-term dive threatened by developers against one main and several ancillary love stories. Jokes of drugs and knockers and the rest. It works out in the end after various misunderstandings. The strip is saved; the nice girl eventually gets with the nice guy after she's spent time in the strip club; the nice guy fails at rock but wins in love; the narcissist rock god is on the run from police over sex with a 16 year old; the developer father makes up with the gawky son. It was a Broadway hit (what, 16th longest run, or something of the sort). And the music. Lots of rock from the late '80s. I recognised some, not least We built this city on Rock and Roll, which is an attractive and ear-worming melody. I checked it out later on YouTube and it's all ridiculously young faces, but this era was just that. There were lots of songs that meant nothing to me. But you know, for all that, I came out having enjoyed it all. The performers were not Broadway, but this isn't Broadway and they were genuinely impressive. This is local, non-professional theatre, after all. I admired the voices; the dancers and the staging were great; the music was just what it was, but that's what guitar rock is and they did it well. But most of all, I enjoyed the open smiles at the end when the cast drops their characters and relaxes for the curtain calls. Suddenly these were community and I could feel for their satisfaction in completing another energetic 2.5 hour marathon performance and I felt it with them. I'm not one who knows or warms to this era, but I could admire the effort and skills involved and enjoy it with them and I did. This is the Canberra Philharmonic Society, also known as Philo, the long-established local musical theatre company, and they did a great job. Many congrats to all.