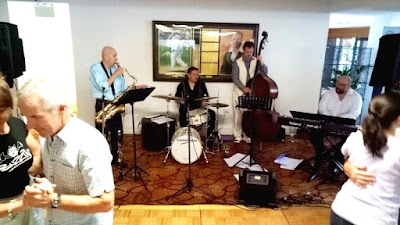 We tend to forget that jazz was once the popular music of its day. We went to a Canberra Jazz Club event at the Southern Cross Club at Jamison and you almost felt it still is. Terry Wynn was playing with the Wayne Kelly Trio and guest vocals Angela Lount and the dancers were up and the kids were running around and the swing dancers were at a near table with their natty period outfits and it was busy.

The place was swinging. The brackets featured a few bebop instrumentals, there was at least one original, this time from Ben, the swinging standards had everyone in a good mood and at least a few couples were always up on the dance floor. How different from the cerebral sobriety of much contemporary jazz. I love that, of course, but this is music for people, clever and well played, and also for entertainment. So, a different side of jazz and well enjoyed and the beer's on tap, too.

Thanks for the write-up Eric, we certainly had a great crowd there and everyone seemed to be enjoying the afternoon. The Jamison Club very kindly allows us to hold a monthly gig there and it's become a home base of sorts for the Canberra Jazz Club. The gig is proving very popular which is great as we strive to keep traditional jazz alive in Canberra.