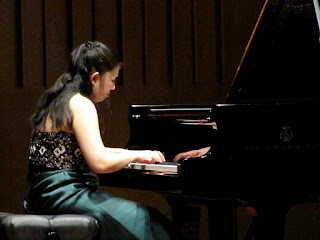 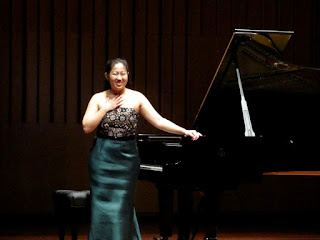 It looked like a tramp through the ages of classical music, and so it was until it got to Liszt. Yu Kosuke played Bach then Beethoven and Takemitsu (later than Liszt) then a few virtuosic Liszt tunes and an arrangement - cum - transcription of Wagner by Liszt that sounded to me much like the other Liszts. My favourite of the night was the Takemitsu, his Rain Tree Sketch I&II, sounding of falling water drops from small leaves, all modern sounding, perhaps whole-tone scales and indeterminate harmonies and no doubt lots of accidentals. Nice and modern and very different from all the others. The Bach was Aria variata alla maniera Italiana Amaj, sounding early period and much like a set of variations. The Beethoven was his Sonata no.21 Cmaj Walstein. It's popular and even I recognised it. Very different playing, though. I wonder how Yu gets her head around such changes. Everything was played without music. Then the interval and the Takemitsu and the Liszts, Les jeux d'eaux à la villa d-Este and Ballade no.2 Bmin, played attacca, without a break, as I remember, then the Wagner transcription, Isolde's Liebestod from Tristan and Isolde. I admired her sense of the pensive which she often visited. Also the clarity of exposition of melodies as they moved between right and left hands; that may be a foundational skill for professional soloists. I wondered about her take on Bach which seemed relatively loose and flexible, but I think that's an ongoing discussion amongst performers of the baroque. All questions that I have, but they tend to arise most easily when you have a player of such clarity. Much enjoyed.