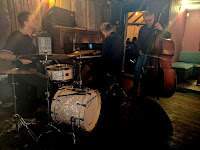 It was my Wednesday night off so off to OCI for a beer and chat and jam. Wayne, Ben and Mark S have been running this now for several years and it's quite a scene. On a cold winter's night, it's cosy in the genuine old slab hut pub, the beers are good and the gastropub food is on. But most interesting is the playing. Hugh sat in for Wayne this night. Either way, this is a hot and supremely capable and swinging band. The tunes are standards and jazz tunes, but there's no tiresome commonness here. They are great musos and play with invention and communication. A huge pleasure. Hugh and Wayne are different styles, but equally capable. Ben was just a master last night, soloing on German bow or pizz, all the time interesting, melodic, phrased rather than scaled. And Mark is always sparkling. And it's a welcoming gig with Ben knowing everyone on the scene and always inviting anyone to play. Peter played with Mark L and Hugh, then Tim; I played with Tim and Hugh then Brendan (using Peter's 5-string NS with high-C, then Ben's bass); Tim played with Alec and Hugh. Maybe others? All manner of tunes from various fake books, mostly memorised. I particularly noticed some fine jazz tunes from the house band, not least Moment's notice. The beers was good and the scene busy and the room warm. It's a great night out for musos and mates. 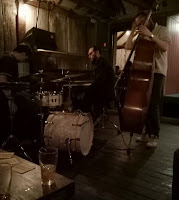