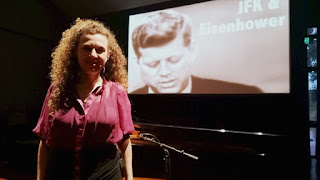 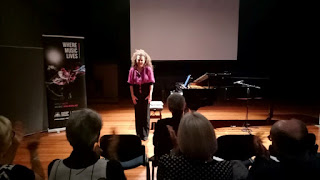 I admire and enjoy and am educated by Robert Davidson and his music of politics and art and public matters. I saw the Singing Politician performed at the last CIMF by Robert with his band Topology and a choir and it was thrilling, touching on so many important points in Australian life through political speeches. Being a political junkie helps, and this was true to form and attractive to me in attitude, and the music was thrilling and wonderfully interpreted and performed against the memorable words. I just saw Stalin's piano with piano (and one spoken segment) by Sonya Lifschitz accompanying a projected video. This is multimedia and visual at that, so the musical component was largely lost to me, from following the snippets and their differing stories and doubly so from reading the subtitles. That's to be expected: visuals are so much more intrusive and powerful than sound. It always wins; think TV vs radio. But I remain perplexed about the theme. The work is made up a string of snippets, covering WW2 politics through to today, but introduced by a few architects, touching on music and composers and performers, Communism and Nazism and the bomb, past a few poets reading poems to finish with feminism and dance. Mmm, I am perplexed. Someone suggested there's no theme, or that it was about how politics and art mixing in culture. Too broad for my satisfaction. It ends with identity (today's obsession) but how did it get there, from Le Corbuisier via Hitler. The snippets visited are: Brecht at teh House of Un-American Activities Committee; Le Corbusier and sun, space & light which got a beating; Frank Lloyd Wright and suburbia as grace not disgrace; JFK and Eisenhower and the Cuban Missile Crisis (with some unexpected and even amusing loops); EE Cummings and a poem; Percy Grainger and music as the art of agony; Shostakovich and Stalin and pianist Maria Yudina; David Malouf and another poem; Goebbels with subtitles and truly fascinating film I'd never seen; Thomas Mann on Nazism; Ai Wei Wei on Mao; Arthur Boyd on writing as precise but painting as not (again, words vs visuals); Jackson Pollock on the evolution of painting; Whitlam on Blue Poles "$1.3m for dribs and drabs" (he who had the last laugh); Donald Trump on women; Julia Gillard's Misogyny speech; finally Robert Helpman. So what to take from that? I'll mull further, but you've got to hand it to RD with his broad vision and social concerns. Getting it all to sit together, or to tell a clear story is a challenge. Otherwise, there's lots of grainy video and odd cuts and distorted voices, all perfected appropriate to era or effect, like the hand held books for poetry readings. It's history but also art. But what of the performance? I listened occasionally and it was good, powerful, fitting. I certainly look forward to listening more closely to a future concert by Sonya, but this time the video and ideas took precedence and also stole attention.