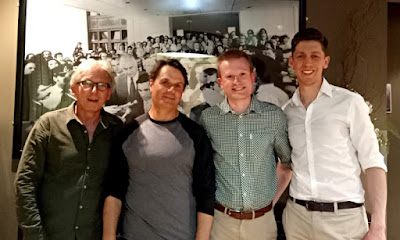 Finally back to playing after a few weeks off and first gig up was National Press Club Friday evening jazz session. It's an august institution where the cream of local jazzers have played over the years so a great privilege to perform there. We accompanied Josh Knoop, a guitarist with a love of Pat Metheny, softly toned, lithe and malleable. Old friend Lauren Black, once of ArtSound and In Full Swing Big Band, was in the house and we inveigled her into a few jazz numbers. No pic of Lauren this time, but one of the band in front of the monumental and monumentally large photo of Whitlam at the Dismissal, scowling over the shoulder of David Smith on the steps of (now Old) Parliament House. Then another outing the next day for a private function, a significant birthday party (Happy birthday, Alex) so a busy weekend for Tilt. Coming up next weekend, a mix of orchestral and jazz.