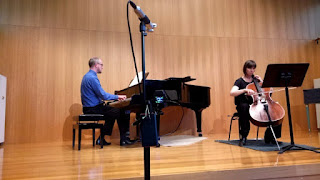 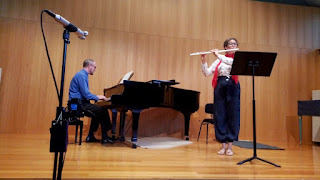 The concert was entitled Vivacious. It certainly must have been active for a day or two before as one performer was sick and the program and even the handout had to be redone. Katherine was introducing Faure Sicilienne saying she's expect to play it better than when she learn it as a kid. No doubt she did (her performance sounded nothing like the work of an early player) but I guess that meant it was a late insertion. None the less, they did great. The soloists were Fiona Dickson on flute and Katherine Wilkinson on cello, with Anthony Smith piano accompaniment. Katherine played Pergolesi, Faure and Beethoven sonata no.3 Amaj for cello and piano. Fiona played Debussy and Bartok. A varied program in time although with several songs of historical or geographical interest. Anthony is a master and always on form. Fiona and Katherine were each excellent in commitment, interpretation, dynamics. I think the Beethoven was my favourite, although the Debussy was airy and playful, even if some related to tombs or rattlesnake dancers. The invocation of Pan at the start must have carried over to the rest. It's a great pleasure to have Wesley and lunchtime concert like this on the doorstep and this was a notable example.