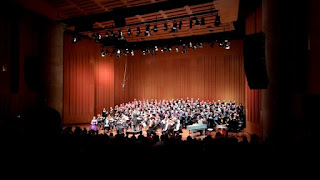 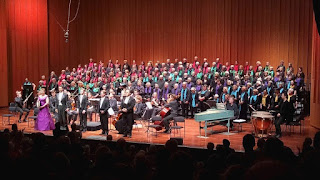 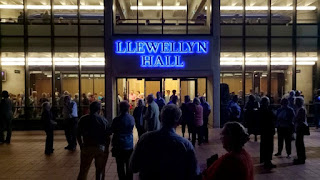 It's an advent event most years. It's Handel Messiah performed by Canberra Choral Society and friends under chorus master Peter Young conducted by Leonard Weiss with soloists Greta Claringbould, Tobias Cole, Paul McMahon and Jeremy Tatchell. All locals or thereabouts and an array of recognised faces on stage. That's part of the fun, of course, to recognise faces. And the music, which I am coming to understand and follow and appreciate: how and when soloists appear and the Christian Christmas story of joy and despair and the busyness of the orchestra because the soloists and even the choir appear on and off, but the orchestra is at it throughout, at least the strings and keys. I missed the woodwinds playing and the percussion and brass are impressive and essential but infrequent. What a thrill to stand for the Hallelujah chorus, it being so big and rousing that it involves you even if just by standing - sitting for classical concerts is satisfying but also staid. And there were a few singalongs from the audience for this chorus. I also felt like singing some other choruses but was responsible (or elbowed by Megan) when I felt the sing-along urge coming on. No it's not kosher. Sad that I can't get to the real open singalong of the Messiah next week (Wesley, 6-8pm, Sat 23 Nov, $10/5, singers must register). Good feelings abounded in the audience, too, this being a great favourite, and played so capably. I loved the high sops when set free and the complexity of the fugue choruses and the strength of the mid-range tenors and also tenor Paul's voice which filled Llewellyn so easily. And the bouncing baroque music that's so endearing. The orchestra was busy and often flightingly quick. They were perhaps too loud under Greta (they may have just played first desk behind some soloists, restraining the ppps to strengthen the fffs) but small matters. They did an excellent job under Pip Thompson. As for our standing, a man in front of me was a refusenik and it's probably an upper-class-twit custom, but it's fun and involving and all part of Christmas celebrations. As is the Messiah itself. Very well done and very much enjoyed.