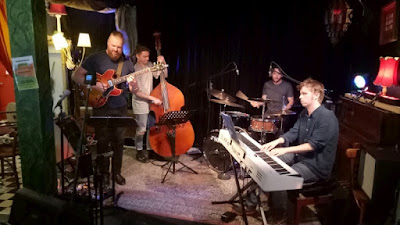 Concert 2 for the day was Victor Rufus' band playing at Smiths. Victor has recently returned from several (5?) months in NYC. Does it show that he (and the others in the band) chose to play the music of Aaron Parks, along with some originals, mostly by Victor. Victor writes some very decent tunes. The band was Tate Sheridan, Brendan Keller-Tuberg and Jamal Salem and it was sharp as. Tight as. Clinically sharp. Jamal may be the primary source for this as he's restrained but tack sharp. Tate sounded more laid back to my ears this evening with influences of pop and blues amongst some jazz harmonies and more complex chords. He has a lyrical presence that shines through. I hadn't heard Brendan for a year-or-so and I was stunned with his current virtuosity, and not just fleeting playing but also interesting concepts, fills, structures, counterpoints. He fairly recently finished his degree and I can feel some extensive woodshedding in his playing these days. As I've seen in one or two other serious players over the years. Stunning. And Victor, professional and affable as a leader and melodically clear as a guitarist and soloist, nicely toned and avoiding the too-common guitar excesses. I like his compositions, too: he excels here. I listened to the channelled Aaron Parks album after and was surprised by the effectiveness of the performance I'd heard. Sharp, clear, with intent and sympathy for the original. Interestingly, they also played a tune by Harry Rasmussen, another drummer of recent years at the ANU. Victor's tunes were perfectly in synch with the evening: Truth be told, Intermittent schmitz, Song of sonnenblumen. All telling his own stories. This was a tack sharp evening of art but also of comfortable professionalism.