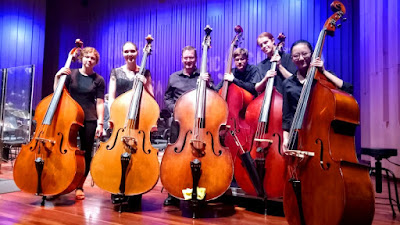 Jazz meets classics. It's not the first time this year for the Canberra Youth Orchestra. There's much to say about this outing. It's the last concert of their 50th year season and the orchestra was big, partly from ~20 CYO alumni who were sitting in. So the bass section was 6 not 5 and the orchestra was seriously big. The audience was also generous: Llewellyn Hall was virtually full. And the featured guests, James Morrison and his quartet, were a blast. So what to make of all this? The orchestra introduced each set with a piece. First set, this was Gershwin American in Paris; second set was Copland Appalachian Spring concert suite. All well performed but I had a clear preference. The Gershwin was a busy, street-wise piece, challenging and alive; the Copland is well-recognised and features some recognisable themes, but seemed relatively tame. Obviously, I preferred the Gershwin. Then, Morrison came on for a few tunes each set.

James Morrison is a superb instrumentalist, fabulously adept at multiple instruments, clearly world-class in his field. And he's an entertainer, jokey and personable, as you need to be to make a living in this business. And he has a great little band with him: two sons, on guitar and bass, and a drummer. I'd seen most of the band (without papa) at Smiths and been mightily impressed by their dynamics, their cleverness and chops, their melodicism and the rest. They are seriously good players and papa is world-class. No doubt. And he's an entertainer, so those non-jazzy types were putty in his hands. We got a powerful blast of post-swing jazz and we knew it was good. JM does it throughout the world; that mix of hot jazz and luscious orchestration. He did it for us here, too, and I loved it. It sells, it's popular, it's supremely capable and very inviting entertainment. Local Zach Raffan came on too, to jam with the master. He did well, although James was obviously being gentle. JM is seriously a master of very many instruments. His ease of melodicism, his embellishments, his beauteous tone, especially on the various brass instruments, trumpet, flugelhorn, trombone, were a thing to admire. His flugelhorn was the strangest look, vertical with rotary valves, but had the sweetest tone I've heard. His trombone came with polyphonics (perhaps courtesy of his chops??). His piano was impressive. His chatter was polished. They played All blues, Enchanted (an original by JM), Round midnight, Caravan, Mood indigo, Love is a many splendoured thing, My funny valentine, El gato (Ellington) and a blues encore. All hot as or emotional as. I could only dream of playing like this. Dynamics, melodies, ease. Not too much challenge but always right and richly inventive within its world. Not the current state of the art, but hugely capable and I loved it. And the added orchestral richness was a huge pleasure.