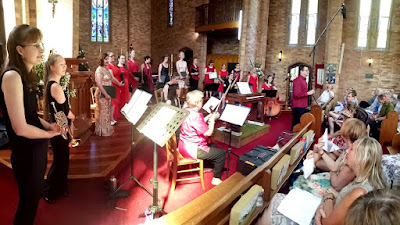 These are busy weeks towards Christmas. Mine was last weekend with NCO and Maruki. For Pip and Michelle and Clara it was this weekend, with 2 concerts (that I know of) on the Sat and Sun. This one was by the delightfully named AdHoc Baroque playing a program of Venetian music, of Galuppi and Vivaldi. Galuppi was from Burano, one of the Venetian islands, and became maestro di musica at the Mendicanti orphanage. Vivaldi is famous for his time at the Pietà orphanage as maestro di coro. The orphanages were the centres of music-making in Venice at the time (~1700s) and Vivaldi's is especially famed to these days. AdHoc got together a fascinating concert of music of the era, partly sung by Greta and Maartje, but with the addition of an additional 10 singers for the ladies of the Pietà choir. This was a very female event with 12 singers, 8 instrumentalists and Peter as the only male. It was something like this at the orphanages which were primarily female, orphaned or otherwise. The males of the time were sent to work from early age, 10+, and the women were otherwise entertained. But perhaps the most intriguing thing was the singing. The choir sang in SATB format, like the orphanage choirs of the time, so some women were singing the TB (=tenor, bass) lines. Most likely they sang tenor and bass an octave higher (although some women sing tenor in today's choirs). So the pitches would have been closer and the chords inverted differently, any part may have taken the top line and perhaps some women had to transpose from bass clef. All interesting. I listened but didn't particularly hear it as different from a standard women's choir although I did notice a few close pitches. Another muso said much the same. But it was clear and pretty in the higher pitches with only the bass and viola da gamba reaching any depth. Otherwise, I was sitting behind BJ Gilby, so taking a lesson in bowing and expression, and right next to Julie and Chayla, so hearing the glorious trumpet and oboe parts. So the balance was odd, but I took a break from watching bass. The main work was Vivaldi Gloria RV589. Otherwise Vivaldi Nulla in mondo pax sincera and Galuppi Confitebor tibi Domine and Ave regina coelorum. A beautiful program and some glorious performances. AdHoc in name only; glorious in performance.