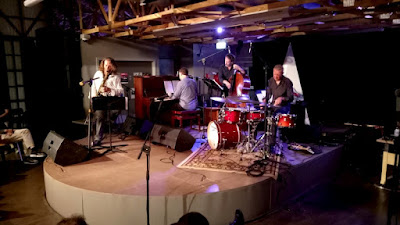 My first concert for the night was John Mackey playing with Matt McMahon, Jonathan Zwartz and Simon Barker celebrating the 50th anniversary of Coltrane's death. Just stunning. It was Geoff Page's concert series, now in the ANU Popup village, with space, a larger stage, a piano (upright), PA and peopled with an audience of 150 or so. They were playing a blues as I entered. Stunningly expressive, exploratory. John's tone big and edgy and beautifully formed, breathy to end notes, varied to follow his phrasing, spread over all manner of consonance and dissonance, always purposeful, honest and hugely expressive. But they were all stunningly masterful. Matt on piano maintaining long, long eighth-note runs, moving through harmonies with ease with stunning chordal stabs and colourful leading chords behind solos and I guess those sounds were fourths voicings because they sounded so true to the original. I think it was the PA that highlighted the interplays: not so much transparent (I've only heard that in massive outdoor rigs) as identifying and projecting the musicians. Matt floored me. But so did Jonathan, and for that matter, Simon, although I'm still learning of his style. Jonathan's a bassist, so easy for me to appreciate. 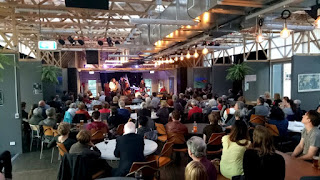 Big strong tone, great intonation right up the neck, but more than that, always inventive walks, a few solos, especially one of the final tune, to die for, fast where it's called for but never without a call, but always fast enough. Such easy moves over the fingerboard spelling such interesting harmonic explications. Stunning. And Simon, a tall man hunched over a low kit, arms and sticks akimbo, fast like the others but not without reason, sharp and accurate rolls and the rest, sometimes head dropped to snare side, sometimes lifted and open and watching the others. The final dissolution was just evidence of the togetherness of this group. They are great musicians, locals of world class, easily playing with whoever but these guys have also played together so this was a reformation and something beyond. There was a closeness that's rare. That final dissolution was so easy and together. I was sitting with some classical mates who were over the world with the performance. The room was abuzz. Stunning stuff.