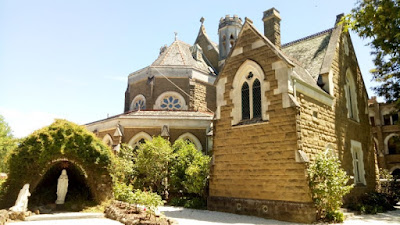 Well, a concert of harp and pipe organ is a concert of relatively obscure and uncommon instruments. As proof, I discovered a list of 44 pipe organs in Canberra and there wouldn’t be too many harps, although we do have an aggregation, mostly around Alice Giles. But they didn’t play together, just a segment each. Martin Setchell presented two small sets of English Edwardiana d Victorian music for organ, with names including Lemare, German, Clark, Bache Bridge and Hollins. Not a well known repertoire although the Lemare piece, Andantino in Db, had been ripped off for Moonlight and roses, so the melody was known for that and Lemare made considerable monies from the copyright case.

The Scotson Clark Vienna March sounded all the world like a barrel organ – a very complex and expensive one in this case. The organ had problems with some stops so the second set was delayed, but this festival has an organ tuner on call to make repairs – the second one I’ve seen on the fly in few days. Visiting Venetian harpist Elisabetta Ghebbioni performed a spectacularly mixed set: from Phillip Glass Metamorphosis Two, through Albeniz to Handle Chaconne in Gmaj, which is a set of variations. I enjoyed this set, if more for the two ends, the Glass and Handel, but I felt the harp was lost in this space. Elisabetta has a great CV but she’s playing on a borrowed instrument. Well, as is Martin, but I felt this instrument really felt and sounded good here. Perhaps it’s the space or perhaps the organ’s relative youth or maybe its maintenance (if it’s maintained anything like the perfect gardens around the chapel). It’a Fincham & Sons of 1903, and apart from the breakdown, the sound was lively and fresh and big. The arched ceiling and surfaces may have helped acoustics. Again, I measured the organ slightly sharp, ~A=444, like the other organs other than St Pat’s which was similarly flat. Interesting.