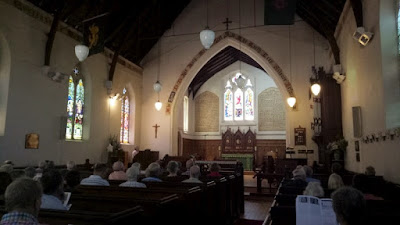 Off to Castlemaine for two concerts. The first was a lovely concert of Mozartiana on a very different style of organ. It was originally a Fincham organ of 1888, but updated with electro-pneumatic action by still extant Geroge Fincham & Sons in 1953. Thus the organist and manuals were on one side of the altar and the organ in a niche on the other side. Presumably impossible with a mechanical organ.

But it was a big sound, able to fill a large and dark space. All Mozart. Not least his variations on Ah! Vous dirai-je, Maman, or as we know it, Twinkle twinkle little star. And the well known Ronda alla Turka with its references to the music of the Turkish Janisseries. And his Leipzig (Eine keine) gigue which was apparently written in a visitors’ book by a young Mozart in appreciation of the chance to spend time on an organ. Or his Andante K.616 which originally accompanied automatons or waxwortks displays in the court he was working at. All fascinating snippets of Mozart’s spirited genius and all well played by visiting New Zealander Douglas Mews in a very dark and foreboding early gold-era church.