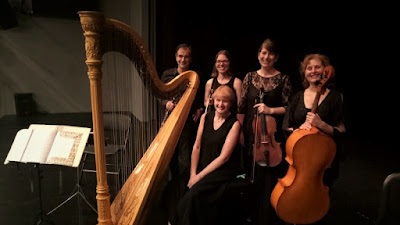 This one was a gentle return to the earlier, more sedate, dignified music of Mozart and Bach, except, due to sickness, a group version of the Goldberg Variation selections was replaced by a new viola player and several pleasant but relatively light quartets by Cimarosa. The other work was Mozart Quintet for Flute, harp and string trio KV299. I followed the second movement well enough (I’d played it with NCO). The other movements were less known but identifiable, but then all Mozart seems like that. His melodies just fall off the pen with immense inevitability. How could they be otherwise? The Cimarosi were played by a quartet of flute, violin, viola and cello. I wondered if the flute part is switched from or easily transposable to another violin. The Mozart added a harp and I wondered similarly about its role relative to piano, but the chords and accompaniment were sparser and the melodies less accompanied by another hand. Probably fairly different, although I remember NCO harpist Elizabeth once playing the harp part on piano in rehearsal. Interesting. Some nice playing, too. I particularly enjoyed the sit-in Helen Ireland and violin Natasha Conrau. Also flautist Andrea Dainese, although wind is an unknown quantity to me. Lovely