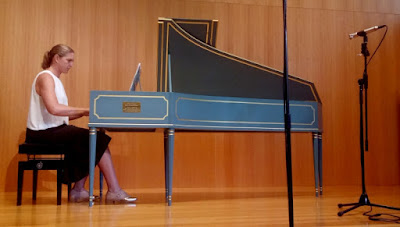 This is civilisation: plinking harpsichord, great master composers, a suitable chamber to hear them in. Ariana Odermatt played two works at Wesley for its Wednesday lunchtime series and we were there. First up, Couperin, the sixth order of his Pieces for clevecin (=harpsichord). It's a series of pieces that varies time and temper and division with considerable fascination as he moved through different time signatures, dotted feels and otherwise, fours and eights. Presumably it was a work for the pleasure of dignifed listeners but it was also a very satisfying collection of music. This was just the sixth order of 27 published in foru books over the period 1713-1730. THe sixth order is in Bb major and the others range through major and monor keys. Then Bach, his Prelude, Fugue and Allegro BWV998. Possessions remain a plaything of the wealthy still today. Rather than an introduction on harmonies and the rest, Ariana told us how the autograph copy sold in recent years at Christie's for £2.5m. Of course, we can get it for free from IMSLP but the original is the thing. It got me wondering how much would that manuscript of Beethoven Symphony no.9 we saw would have cost. I'm glad it's in safe hands in the NY Public Library. But to return to Ariana, the sound was determined and consistent but quite quiet, as harpsichords are, and the playing was firm and contented and contentedly elaborated. I enjoyed both pieces, but the Bach remains king: the fugue a repeating thing of growing complexity as fugues are and the final allegro was just busy and going for it. Harpsichord is an oddly dated instrument but a pleasure in good hands with good writing as here.