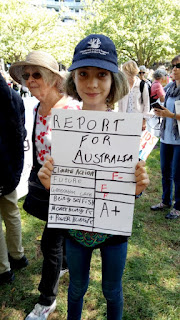 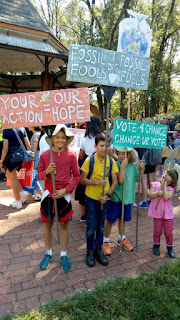 There was a better quote but I can't recall it and they were no tiny tots but leaders. To my eyes, more purposeful leadership there than in the COALition (cute concurrence there!). And given their response of the science of it all, more education. Plenty of posters wittily saying just that, too. We went to Canberra's School Strike 4 Climate. It was a successful affair, led by kids. We greyhairs supported from the back. Happily I encountered several friends. Our generation isn't all a source of despair. Our pollies are failures though. I had this discussion with someone and I reckon it's from a string of reasons: a limited, ideological media; sadly pugnacious politics; influence and money and secrecy about it all; perhaps straight out corruption; bubble-thinking; influenced and self-serving advice; perhaps more reasons. We'll see if Labor will make changes required, but LNP's history of Abbott's Carbon Tax crusade, ScoMo's lump of coal in Parliament, Taylor's "underwritten" coal power, the Nationals' Qld latest coal fired power station call, let alone the Darling and irrigation and the rest, renders them unworthy of election in my book. Very much wrong side of history on an issue of existential importance. Has the routing of the moderates left the LNP on the road to oblivion? Are they doomed by the next generation of voters? I wonder. But it was a good march, the kids are OK and they done good. We need some hope in climate. A skerrick. As McKellar's drought and flooding rains intensify. I wish the kids well.

The Canberra School Strike for Climate was held in Civic. And thanks to Greta Thunberg who started it all: telling it like it is